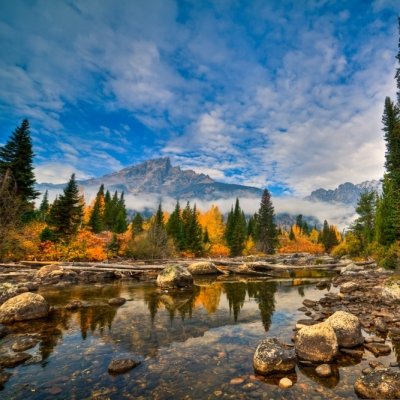 Mountain views have the power to take the breath away and to assuage the soul. Whatever the weather, there's just something magical and powerful about a mountain. And there's such diversity in mountain views around the world because, if there's one certain thing about Mother Nature, she's never boring.

Practically anywhere in Switzerland you can wake up to glorious mountain views.

Wales - the land of song! There's always a welcome in the Welsh Valleys.

Via Mount McKinley with Pond

Aka Mount McKinley, Denali is the highest mountain in North America.

4. The Road to Monte Fitz Roy, on the Border between Argentina and Chile

A stunning view of the South Patagonian Ice Field.

Such beauty is always a sight to behold.

Via Visit Lofthus, accomodation, hotel and ...

You need a head for heights for some of the best mountain views in Norway. This overhang - known as the Troll's Tongue - is 2,000 feet high.

You could easily fill a huge photo album with stunning views of the Rockies.

The enduring symbol of Japan, there are endless views of Mount Fuji and it's spectacular from all angles.

New Zealand is the only other country in the world besides Norway to have a fjord coastline.

The Tatra Mountains form part of the border between Poland and Slovakia.

Via the power of a breaking ...

The Dolomites are recognizable by their rugged, narrow, sharp peaks.

The views from trains through the high Alps are breathtaking.

Via Das Lila Lied (The Lavender ...

Tasmania is one of the most scenic Australian states. Cradle Mountain lies in St. Clair Lake National Park.

The Bhote Koshi is a river that runs between Tibet and Nepal in the Himalayas.

The most beautiful peak in the Karakoram Range.

Via A little farm tucked away ...

Imagine the colors in fall when the leaves change.

Picture taken on a clear day when the mountain hasn't got a cloud for a tablecloth.

This mountain is the highest active volcano in Eurasia.

I have actually been along this road and stood on the glacier at the end of it - when it was snowing! It was an incredible experience.

The serenity is incredible.

Part of the Great Dividing Range, the Blue Mountains are just north of Sydney. The formation in the center of the picture is called the Three Sisters.

The view in both directions from the train windows is awesome.

The inspiration for the Pandoran landscape in James Cameron's Avatar.

Some of the best mountain views in the world are in the European Alps.

Breathtaking by every definition of the word.

Via Cottage At The Foothill Of ...

Just some of the greens that make up the 42 shades of green in the Emerald Isle.

Via half dome hdr

Ben Nevis is the highest mountain in the UK.

The Tallest Mountain in the World.

According to The Bible, this is where Noah's Ark came to rest.

Via Holbrook Travel- Join an Expedition

The colors are due to minerals in the lava and thermal waters.

35. Milky Way over the Mont Blanc

Via Milky Way Over the Mont ...

Can you imagine the sight of the stars from such heights?

Via Searching For Moonlight

Its name means "Mother's Necklace" and by moonlight, it's simply stunning.