Magnificent Madrid, beautiful Barcelona, stunning Seville – Spain’s most majestic cities are favorite tourist destinations, but if you’ve been there, done those, or just want a different flavor, there are more cities in Spain worthy of your attention.

1 Eat and Be Merry in Salamanca 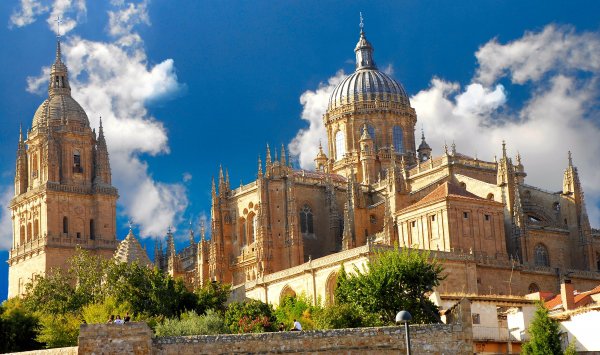 Salamanca, in central Spain, is commonly known as "The Golden City", on account of its lovely sandstone buildings which seem to glow when the rays of the sun caress them. Fashioned from sandstone that came from a local quarry, Salamanca is one of the most beautiful cities in Spain and home to one of Europe's oldest universities. Salamanca's university was founded in 1218 and since then, generations of graduates have ensured that much of the wealth they created during their lifetime remained in the city. From the gorgeous 12th century Catedral Vieja and 15th century Casa de las Conchas, a monument decorated with hundreds of sandstone shells, to the lovely Baroque Plaza Major, Salamanca is a delight. After a day of sightseeing, join the university students at the city's main square and be inspired by their infectious enthusiasm. Plaza Major is a charming place to unwind with a drink and a meal. 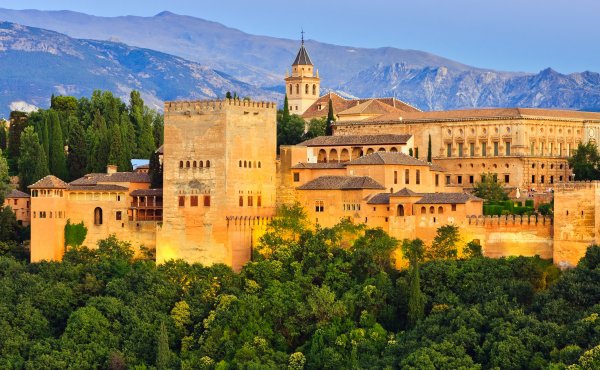 Granada is one of Spain's most visited cities, attracting not just thousands of tourists but also multitudes of students, who flock to this stunning settlement in the foothills of the Sierra Nevada Mountain range to study, party and enjoy life to the full. Serving as the provincial capital of the Granada Province, the city is rich in Moorish architecture, most famously the enormous Alhambra palace complex. The reign of the Muslim rulers ended when the Catholic King Ferdinand and Queen Isabella of Spain entered the city through the gate of Puerta de Elvira in 1492 and declared the Moors defeated after years of bloodshed. Built in the 13th century, the Alhambra is one of the most beautiful buildings in the world, brimming over with delicately carved stonework, enchanting fountains and verdant gardens. At sundown crowds gather at the Mirador de San Nicolás, a paved lookout where the Alhambra's ancient stonewalls glow red in the setting sun. For a taste of what it must have been like to live in such a city in medieval times, head to the ancient Muslim quarter, where once Moorish administrators and rich merchants had their white-washed mansions and splendid gardens.

3 Art and Architecture of Bilbao 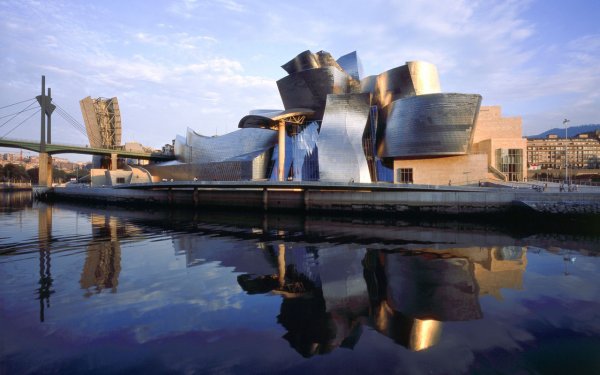 Long ignored by tourists who thought there was little more to see than the city's port, Bilbao has become one of the most interesting cities in Spain for art lovers and fans of outstanding and innovative modern architecture. The Guggenheim Bilbao Museum is a must-see attraction when visiting Spain. Designed by celebrated architect Frank Gehry, the museum is a stunning example of modern architecture and reason enough to come to Bilbao - never mind the amazing exhibits that await visitors inside! At any one time the Guggenheim displays more than 100 modern art exhibitions that are housed in a titanium-clad building that is as curvaceous as Sophia Loren and as sexy as a young Marilyn Monroe. Cross the futuristic Zubizuri footbridge and you'll reach Bilbao's Old Quarter, a maze of narrow streets lines by lovely churches and ancient merchant houses. Now restored to its former glory the 14th century Santiago Cathedral is a marvel of Gothic Revival architecture. At the neighboring 16th century Basilica de Begoña you can enjoy several large paintings by the Baroque Italian artist Luca Giordano, before retracing your steps and joining the 21st century at the Guggenheim again.

4 A Stroll through Logroño's Old Quarter 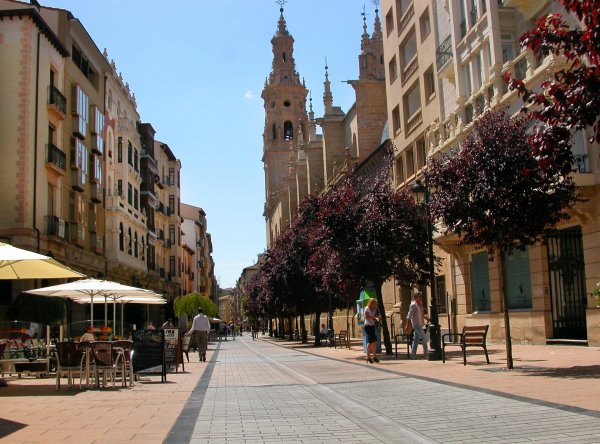 Logroño, in the north of Spain, was a fortified town during the Middle Ages and its Old Quarter still retains its medieval splendor, drawing tourists to its maze of narrow streets and enchanting courtyards. It is among the cities in Spain that lie along a pilgrim trail and Casco Antiguo has welcomed pilgrims on their long way to the tomb of Saint James at Santiago de Compostela for longer than any tourism chief can remember. Be sure to visit the lovely sculpted Romanesque front of Church of Saint Bartholomew and the gothic Santa Maria de Palacio church, which boasts wonderful carvings and statues. Logroño is also the trade center for the world-class wine producers of the La Rioja region, an area equally famous for its delicious cuisine. If you're looking for a place to eat that the locals would recommend, head to the charming historic gardens that line the picturesque Paseo del Espolón, where you'll find some lovely eateries. 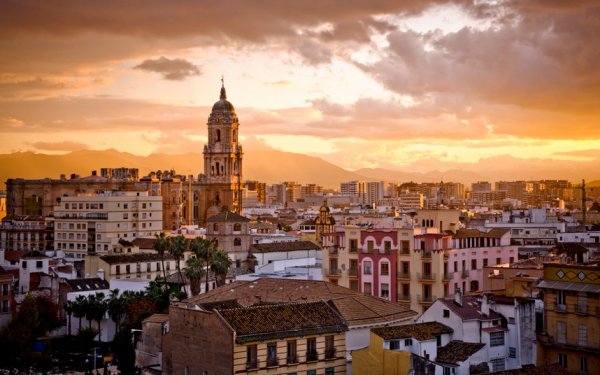 Malaga has been one of the most underrated cities in Spain but is rapidly gaining ground. Now receiving travel accolade after travel accolade for being one of Europe's best cultural city destinations, Europe's southernmost large city boasts not just one of the sunniest climates for 8 months of the year, the city at the Costa del Sol also features some of the best art collections and museums in the world. From the Picasso Museum to the Museo Carmen Thyssen, Malaga is more than its sum of tourist bars and nightclubs. The St Petersburg Museum of Russian Art and Pompidou Center at the Cube building in Malaga Harbor are just two of the city's amazing new tourist attractions which will open to the public in 2015. Malaga's oldest attractions date back to the time of the Phoenicians. Visit the cellar of the Museo Picasso Malaga, where you can still see some of their ancient monuments or head to the Roman theater, which dates back to 1st century BC. Malaga also boasts a fun-packed Museum of Wine and award-winning Museum of Glass and Crystal. 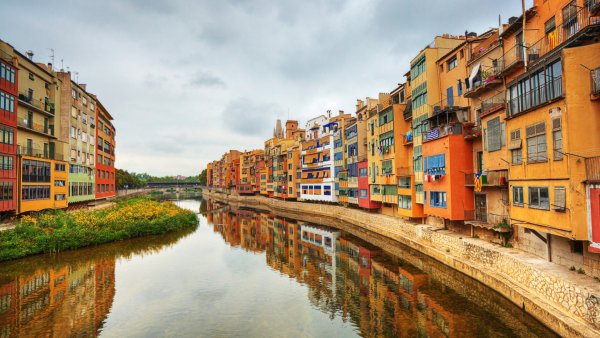 Although one of the smallest cities in Spain, Girona makes up for its lack of size by sheer force of historic character. Girona received its nickname, "The City of a Thousand Sieges", by standing up to generations of invaders who tried to overrun the medieval city in the last few centuries. Situated in the north-easterly region of Catalonia, tough little Girona's Old Quarters date back to Roman times and still boast Roman walled fortifications. Girona also has tourist attractions like Arabic baths and Gothic churches, narrow cobbled lanes and alleyways that take days to explore. If you want to work off all that chocolate and churros you've been guzzling in the cafes of Girona's main promenade, the Rambla de la Llibertat, climb the 89 steps that lead to the portal of Girona Cathedral, before feasting your eyes (calorie free!) on the famous "Tapestry of the Creation", an embroidered 11th century panel of stunning beauty and craftsmanship.

7 Be Nice to the Bulls in Pamplona 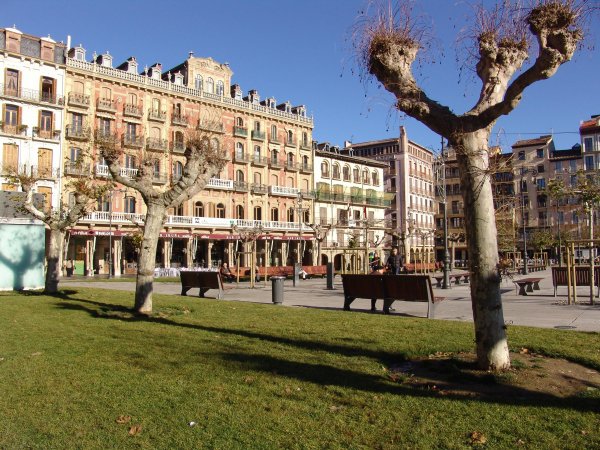 Pamplona is the capital of Spain's Navarra region and most famous for the city's annual "Running of the Bulls" event which takes place during the Fiesta de San Fermin and has recently come in for a lot of criticism. Instead of chasing poor (and not necessarily defenceless) bulls through the streets of Pamplona in July, visit the city in spring, when it's less crowded. The Old Quarter is home to some wonderful historic churches and a picturesque park. The Museum of Navarra, housed in a 16th century hospital, displays an amazing collection of Roman mosaics and artifacts found in and around the city. There are also lovely 13th century murals, Goya's portrait of the Marqués de San Adrián and many Renaissance masterpieces that will help you to while away an afternoon without getting into conflict with cattle.