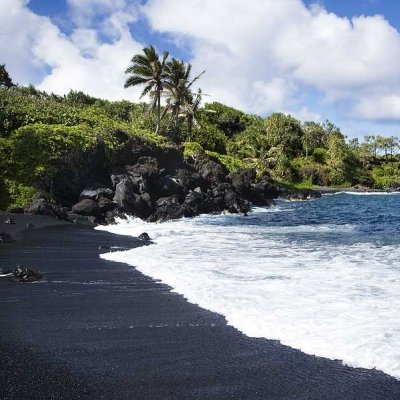 I was reminded by a photograph of a holiday in Lanzarote just how different and beautiful black sand beaches are. They are a bit of a shock at first because we’re so used to seeing gold or silver sand sweeping down to the ocean. There’s also a slightly different feel to black sand. Black sand beaches are created by volcanic activity so the places you’ll find them are volcanic islands and areas. Places like these…

Vik is the most southerly settlement in Iceland and it’s also home to one of the black sand beaches that regularly appears in “Best of” lists. The beach is more than just black basalt sand. There are stunning rock formations just offshore as well as sea cliffs that are home to many seabirds including puffins. Some interesting facts: Vik is the wettest place in Iceland; the area has been used in the filming of Game of Thrones; and head due south from Vik and the first land mass you hit is Antarctica. Wowser! p.s. unlike black sand beaches on tropical islands, the water here is not conducive for a paddle.

Santorini is often described as the very best of all the Greek Islands and its beaches go a long way in creating that claim to fame. Among the stunning examples is Kamari Beach, just a few miles south east of the island’s capital, Fira. The sand is fine and black but what makes Kamari stand out is the huge rock stack known as Mesa Vouno that stands like a sentinel in the sea. Why so special? It shines in the dark.

St. Lucia is blessed with many gorgeous tropical beaches and a number are black sand beaches. You can head to the romantic Anse Chastenet or Anse de Pitons at the foot of the icons of the island, Les Pitons, but if you want more of a visual experience, Anse Cochon provides it. At Anse Cochon, white sand ribbons mix with the black sand, making swirling patterns. Bonus – you get to enjoy the sand in tranquillity as the beach is only accessible by boat and crowds never gather.

I learnt something new about California. Some of the beaches of the Golden State have black sand. Black Sands Beach sits on the Lost Coast which runs for about 80 miles along the northern coast of California. The beach has a length of ~3.5 miles and is blessed with a backdrop of majestic Redwoods.

The Canary Islands are all volcanic so beaches with black sand are common here. What makes Lago Verde however, is not just the sand – you might have guessed given that it’s name is green lagoon. Walk just beyond the charming white-washed village of El Golfo and you’ll come upon a stunning sight. The crescent-shaped green lagoon sits in a partly submerged volcanic crater next to a shimmering black sand beach. It’s like a scene from a sci-fi movie.

Of course the most beautiful country on Earth is going to throw its hat in the ring of beaches with black sand. The finest Kiwi example is Muriwai, which stretches for 37 miles on the west coast of North Island. The shimmering sand is best seen from the viewing platforms at the beach’s southern end from where you can also watch the huge colony of gannets, New Zealand’s largest. You’ll also get a great view of the rock stacks that stand just offshore (are you sensing a pattern here?)

It doesn’t have a recognized name of its own but this black beach is on Maui’s east side in one of the island’s state parks. The sand is a remnant from the lava flows of Mt. Haleakala which is for now, dormant. Apart from the surfing, the big attraction here is the cave. The story goes that King Ka’akea killed his wife while she was hiding in the cave. Plus, they say black goes with everything right? Well here, the surf turns red thanks to tiny shrimp known as opae’ula – the contrast to the black sand is surreal but mesmerizing.

What do you think about black sand beaches? Do you find them as beautiful as golden and white beaches?