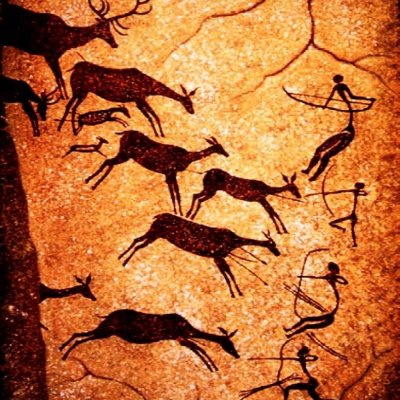 As prehistoric cave paintings go, the Aboriginal art at Kakadu National Park is among the most amazing in the world. With ca. 5,000 art sites alone, ranging from rocky outposts to steep escarpments, the Northern Territory of Australia can boast some of the oldest, as well as the finest prehistoric cave paintings ever discovered. Australian Aboriginals didn't just paint the outline of the animals they observed and hunted, they painted the creatures' bones and internal organs as well – some 1,500 years or more before Leonardo da Vinci got round to doing just that on parchment. Some of the rock art is 20,000 years old, some is modern day, but most of the paintings date back around 1,500 years.

When Spain's premier artist Pablo Picasso visited the caves at Altamira to study the prehistoric cave paintings there, he famously said, "After Altamira, all is decadence." The high quality of the wonderful cave paintings in this part of northern Spain allows us insight into the way of life our ancestors led tens of thousands of years ago. These art works are among the finest ever created by human hands, no wonder Pablo Picasso was touched by the green-eyed monster!

3 Get a Little Batty in Bulgaria's Magura Cave

As one of the largest caves discovered in Bulgaria, the Magura Cave in the north west of this sunny tourist destination is one of the most revealing with regard to how our ancestors lived between 8,000 and 4,000 years ago. Here human hands created some 700 prehistoric cave paintings that depict a large variety of animal species but which also show how humans hunted, danced and enjoyed themselves around their camp fires. The paintings were created with bat excrement (bat guano), widely available at prehistoric cave stores at the time.

More than 600 rock shelters at Bhimbetka show how people spent their time while living in caves some 12,000 years ago. Here the prehistoric cave paintings are full of color, with red and white featuring heavily, as well as yellow and green. The animals depicted range from crocodiles to bisons, lions and tigers. Many of these prehistoric rock paintings show how humans lived though, making them incredibly valuable to research into humanity as a whole.

5 You Can't Hold a Crafty Graffiti Kid down, Not Even at Cueva De Las Manos, Patagonia

Dating back to between 13,000 and 9,500 years ago, the prehistoric cave paintings at Cueva de las Manos could best be described as early graffiti. Most of the paintings are stencilled outlines of left hands, hence the name of the cave: Cave of the Hands. The technique involved one young artist pressing his left hand against the rock face and then using a spray pipe loaded with paint to create the outline. Eat your heart out, Banksy! Perhaps the most moving of the paintings are those that display animals such as rheas and guanacos and various hunting scenes. They bring us closer to the people who lived in these isolated and wild Patagonian landscapes tens of thousands of years ago.

Some experts believe the prehistoric cave paintings discovered in rock shelters in the Serra da Capivara National Park in northeast Brazil are ca. 25,000 years old, cheerfully flying in the face of the general consensus that human settlement of the Americas didn't happen until much later in history. Never mind when they were created, this prehistoric rock art is simply beautiful, showing trees and animals as well as humans busily going about their daily lives, conducting rituals and hunting for food!

It seems not just the British have been obsessed with weather through the ages – some 12,000 years ago, early weather presenters entertained their fellow cave dwellers with depictions of climate changes seen in the Sahara desert. Here prehistoric cave paintings date from 12,000 BC to 100 AD, recording the times when the Sahara saw far more rainfall than today. Around 9,000 AD the weather forecast would have included plenty of rain, for at that time the Sahara sported luscious green areas with forests and lakes, where huge herds of animals, such as ostriches, giraffes and elephants roamed free, finding plenty of food and water.

The prehistoric cave paintings at the Cumberland Plateau in Tennessee are simply stunning, depicting Native American life 6,000 years ago. Animal images dominate, and there is a whole collection of hunting scenes spread across some 60 or so caves, but there are also many mythical characters that represent the Native American spiritual beliefs. There are wolves, foxes and jackals, reptiles and human images as well as anthropomorphs (basically a human figure depicted in mythical form, with exaggerated fingers, horns or huge eyes). Some of the most accessible caves can be found in Clarksville, where the Dunbar and Mud Glyph Caves are located.

The painted caves in Lascaux Southern France are so impressive the complex has the nickname of the “Prehistoric Sistine Chapel” and are probably the most famous prehistoric cave paintings in the world. The most magnificent are to be found in the Great Hall of the Bulls, where there are lots of pictures of bulls, deer and horses. One bull alone is 17 feet long and currently is the largest single depiction known anywhere. The paintings are found quite deep into the cave complex so the prehistoric painters would most certainly have needed to use lighting – 17,000 years ago! Sadly, the caves are no longer open to the public as visitors over the years have damaged the works of art and the cave structure.

Are you fascinated by prehistory? I love to visit ancient sites and am lucky that Britain has some great places to visit. Where have you been that you’d like to tell us about?