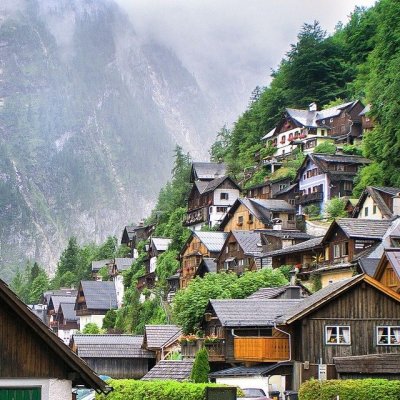 There's no denying the allure of the major cities like Paris, Lyon and Marseille but if you really want to discover and experience French culture, you'll find it in the villages - large and small.

A charming village of stone dominated by the remains of an ancient castle and Romanesque chapel. Expect cobbled streets and views of the Sautadet waterfalls.

It might lack the glitz of Cannes and St Tropez but the ancient village of Eze has fabulous views over St Jean-Cap Ferrat.

A favorite destination of George Sand (writer and lover of Chopin).

The grey granite buildings of this fishing port spread along a spit that juts out into the English Channel (or Le Manche as the french call it.)

A popular destination for walkers in summer and snow sports fans in winter.

This village is overlooked by its castle which is, interestingly, surrounded by a flower garden inspired by Vita Sackville-West’s landscaped garden in Sissinghurst, England.

A typical Alsatian village in the heart of the region's wine area.

An inspiration for artists who can often be seen sketching and painting the citadel.

Overlooking the River Lot, the village is a terrific showcase of medieval architecture.

It's easy to see why the village is known as "the Pearl of Lake Geneva".

Set in an agricultural area, this Picardy village is a picture-perfect pastoral scene.

As well as being picturesque itself, the village offers views of the lovely Portefeuille Valley.

In the heart of the "Parc Naturel Régional du Queyras" Nature Park, at a height of 2042 m, Saint-Véran prides itself on being the highest inhabited village in Europe

Visitors love to wander the narrow streets with their half-timberethe squares that once flourished with trade.

With its impressive castle and homes built on the cliffs along the Dordogne River, this gem is listed among the 'Most Beautiful Villages of France'.

This pretty fortified village's claim to fame is its mustard.

Everything a Provencal village should be and famoulsy where painter Max Ernst spent his last years.

The village sits in a deep gorge where three valleys meet.

The ocher cliffs are the perfect foil for a palette of flaming colors and the village's narrow streets.

This Burgundian village is built around a Benedictine abbey that was founded in the 8th Century.

With no less than 32 listed buildings, Monpazier is regarded as the prime example of a "bastide" (fortified village) among the 300 in South-western France.

In the narrow streets paved with stones from the Lot, the houses date from the 15th to 18th centuries and are lovingly bedecked with flowers.

The village is surrounded by 700 m of ramparts dating from the 15th century.

Nestled in the Alps, the village's beauty is enhanced by the proximity to the Cascade de Rouget waterfall.

With its traditional stone houses and a church that dominates the village, Piana has lots of narrow streets to explore.

Not all charming French villages are in Mainland France or even Europe. This one is on Réunion island, an overseas dependency.