40 Sights of Paris to Remind You of Its Beauty ... 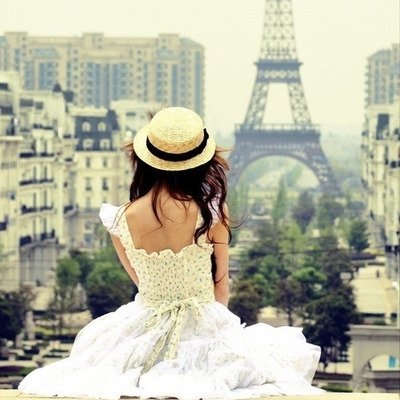 Some of the sights of Paris are so familiar that you feel like you know them intimately even if you've never been to the French capital. Paris is a great city, an old city and a capital city. She is historic and she wears that history in her streets and buildings. Let’s take a short but very pleasant photographic journey through the sights of Paris.

Montmartre is one of the highest points in Paris and has one of the steepest funiculars of anywhere that you can ride if you don't have the energy to climb the wicked steps. However you get there, you'll be rewarded with some of the most gorgeous sights of Paris.

As well as the famous public gardens, there are charming hidden parks around the city.

Via Paris, We Adore You

Yes, some of the good folks of Paris really do still fetch their daily bread on a bicycle.

One of the, if not the, most famous sights of Paris.

Pont des Arts or Passerelle des Arts is a pedestrian bridge in Paris which crosses the Seine River. It is now known as the "Love Locks" bridge for the thousands of padlock love tokens.

Via We'll Always Have Paris

One of the most famous streets in the World.

Home to the Tomb of the Unknown Soldier from WWI, the arch was originally built as a monument to the fallen of the French Revolution and the Napoleonic Wars.

Sorry Paris, but I think the Pyramid is a terrible addition to the outside of the Louvre, although I will concede that it looks good from inside and underneath.

The opera house is one of the most magnificent buildings in Paris.

Via The Natural History Museum Paris

This rather magnificent hall is called the Grand Gallery of Evolution

La Fontaine Médicis is one of the main attractions of the Luxembourg Gardens. The original was built in around 1630 by Marie de' Medici, the widow of King Henry IV of France and regent of King Louis XIII of France.

The oldest church in Paris, it was originally built in the 6th century.

Paris is full of tiny bistros and crêperies on main streets, and in alleys and courtyards.

Yes seriously! In the summer temporary beaches are created along the banks of the Seine.

The writers and artists and philosophers may no longer rule the Left Bank, but the buildings remain and the atmosphere pervades.

Via The New Moulin Rouge, Paris ...

Fondly known as the "Inside Out Building."

The museum is in the former Gare d'Orsay, a stunning Beaux-Arts railway station built between 1898 and 1900. The museum holds mainly French art from 1848 to 1915, including paintings, sculptures, furniture and photography. It houses the world's largest collection of impressionist and post-impressionist masterpieces.

The largest cemetery in the city, it's the final resting place of luminaries such as Bizet, Balzac, Sara Bernhardt, Jim Morrison, Yves Montand, Proust and Oscar Wilde.

Via La Maison Rose in Montmartre

So many of the sights of Paris are connections to great artists, writers and musicians. La Maison Rose is where Picasso used to paint in return for free food.

Via Photos and videos by Paris ...

One of the best days to be in Paris is 14th July, when the vents that kick started the French Revolution are commemorated.

The English language bookstore that opened in 1919 and was a popular meeting place for the likes of Ernest Hemingway, James Joyce, Ezra Pound and Ford Madox Ford.

Via Avec Me — audreylovesparis: Paris

The Paris equivalent of Harrods on Boulevard Haussman - all decked out for Christmas.

Another of the unmistakable sights of Paris.

A typical street where you can shop, eat or just perambulate to soak up the atmosphere. And talking of shopping ...

Paris is home to many of the top fashion houses and their flagship stores.

The Seine isn't the only waterway in Paris.

Now you can see why Paris is called the "City of Lights."

Oddly, despite its name, the Pont Neuf is the oldest
standing bridge over the River Seine in Paris. Its first stone was laid in 1578.

Via ALICIA FASHIONISTA: {travel diary} A ...

One of the best places to go if you want to learn of the history of Paris.

The art nouveau entrances and signs for the metro stations are a beautiful part of the fabric of the city.

Properly called the Basilica of the Sacred Heart, the white marble church stands on top of a hill in Montmartre.

The underground mall stands under where the original Les Halls produce market operated.

The most ornate bridge over the Seine, even more beautiful when bathed in golden sunlight.

Via Another Passenger ((via Zagreusfm))

One of the oldest restaurants in Paris.

Via Carnavelet Museum - Paris Although ...

The smaller museums are some of the lesser known attractions of Paris but if you've got time or are a repeat visitor, they're worth checking out.

Via Paris Sunset in DisneyColor

A stroll along the Seine or a river cruise is a must and it provides plenty of fabulous photo opportunities.

What are your favorite sights or attractions of Paris?