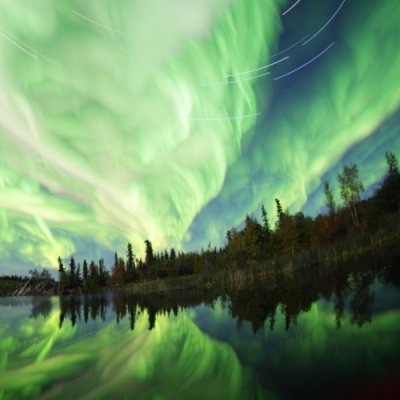 One of the most common items on countless bucket lists is the Northern Lights. These explosions of color in the sky are limited to certain areas of the world in both the Northern and Southern Hemisphere (where they are naturally called the Southern Lights) and occur when highly charged electrons from solar winds interact with elements in the atmosphere. They create dizzying patterns in rainbows of color and the name Northern Lights seems so insignificant for the beautiful wonder they are.

Via The Northern Lights, Alaska - ...

Alaska is one of the first places that comes to mind when thinking of the Northern Lights.

The shapes created by the light depend on the distribution of the charged particles in the atmosphere and wind direction.

Iceland is another of the countries lucky enough to experience the spectacle of the Northern Lights.

An incredible green sweep over the snowy pine forest.

5. Rainbow of the Night Sky

The color of the aurora borealis is totally dependent on which mineral particles are in the atmosphere.

Much like cloud formations, you can find all sorts of
shapes in the light show.

Via Mixed Magnificent Photography | From ...

And if you have an active imagination you can see Asgard!

Via From moon 2 moon

When you look at the tiny dots that are the town, you can understand the scale of the spread of the lights.

The caption that came with this photo claims that North Dakota is the only US state other than Alaska that experiences the Northern Lights. I wonder if that's true.

It's a magical combination when the sky is clear and you get to see the stars too.

So gloomy yet so stunningly beautiful

Via Northern Lights and the Universe

I could spend hours looking at this.

Some people see an eagle, some a Phoenix. Me? I see a Native Indian chief's headdress.

Well I never knew that. Northern Lights in Northern Ireland. Wow. So close to home.

One of my favorite pictures of the Northern Lights.

Via Northern lights in Lappish winter

A better reason to visit Lapland than Santa Claus.

Via The Northern Lights: Trip of ...

Kali is the word we Brits use for sherbet powder.

Skies are incredible when there is no light pollution to spoil it. Even the palest aurora shows up beautifully.

I love it when the aurora light is thickest when close to the Earth's surface.

Via Spectacular displays of the northern ...

Mother Nature always did look good in green and red.

To me, this looks like a curtain falling to cover the mountain tops.

Imagine the view the people who live on the town on the coast had of this.

A surreal combination of sunset and the Northern Lights.

I truly hope that depth of color is real but after seeing many thousands of pictures of the Northern Lights I doubt it. It might be photo shopped but still it's stunning.

Via The light and the lighthouse

Can you see it?

30. Wonders of the Norwegian Sky

The wonders of our world! The sky is a wash of red and green yet the snow is glistening gold.

I just love to find pictures in the aurora. I can see Queen Victoria. She's bending slightly forward and she's wearing that lace head covering so prevalent in many of her pictures. Can you see the same?

One of the rare daytime pictures of the Aurora Borealis,

I do love the red auroras.

Via Astronomy Photographer of the Year ...

But I love the green and red ones too.

35. The Aurora Borealis as Seen from the International Space Station

Sorry, I'm off on my travels into guess the shape of the aurora again. I'm seeing an angel, side on.

Via Aurora borealis and birch trees ...

The birch trees look fabulous with an aurora as their crown.

Do you remember the ink on chromatography paper in science lessons at school?

39. The Milky Way and the Aurora Borealis

Via Most Beautiful Destination Around The ...

Is it fair that Iceland gets so many incredible views?

Kirkjufell means "church mountain" and it is truly blessed.

Tommy Eliasson has captured a shot where the lower reaches of the aurora look like sun rays.

I'll know I've lived a life when I see this in person.

It's filling the sky.

45. Lights of Our Universe

Multicolored auroras are so breathtaking.

Via 30 Brilliant Aurora Photography For ...

The formation here is almost like geometric planes of light.

I really hope that's a falling star in the top right because that would make this picture even more magical.

48. Aurora Australis and the Milky Way over Queenstown, New Zealand

In my humble opinion, New Zealand is the most incredibly beautiful country on Earth. This underlines it.

What a gloriously solid glow close to the Earth that dissipates as it climbs higher so we can see the majesty of the sky filled with stars.

A vision in gold, pink and purple.

There's generally a much more golden glow to the Aurora Australis than its northern cousin experiences.

Via Great ball of fire! Spectacular ...

This is one of the incredible explosions of color that followed the biggest bursts of solar radiation for five years. The solar storm occurred in March 2012.

53. Aurora Australis down under

The more I see pictures of the Southern lights, the higher seeing it in person creeps up my bucket list.

Via The Southern Lights are another ...

And that's exactly why.

Via Aurora over Governors Bay

Incredible - even over one of the country's biggest cities.

56. The Comet in Queenstown on the Night of the Aurora Australis, N.Z

Via The Comet in Queenstown

A long triangle of gorgeousness splits the ceiling of the sky.

Sending rockets laden with scientific instruments helps us
understand more about them.

Via Auroras light up South Island ...

Are you all tuckered out after all those incredible pictures of the Northern and Southern Lights?

Have you seen them in person? Where was it?