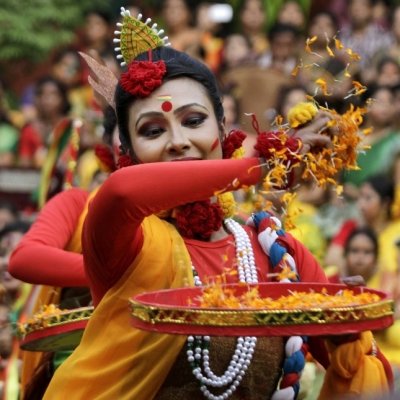 There are so many glorious sights of India. The country is huge (it's the 7th largest in the World), and it has a population of 1.2 billion and an incredible history. It has held a fascination for travelers for centuries, people who are drawn to it for its mysticism and soul. It is a land of colors, religions, monuments and diverse people. If the land is calling you to visit, here are some of the main sights of India you can expect to see.

Surely one of the most well known attractions of India.

The statue of Shiva at this Hindu temple is 65 feet tall.

Via The Golden Temple, Amritsar, India ...

Its formal name is Harmandir Sahib and it's a Sikh temple.

Via This is India

The monument was built by the British when India was "The Raj" and Mumbai was called Bombay.

Via The Messes of Men

The mausoleum is the tomb of Nawabs - semi-autonomous rulers who served the Mughal emperors.

Via Red Fort Agra by CitizenFresh ...

A UNESCO World Heritage Site, Agra Fort's aspect today is a result of modifications made by Shah Jahan - the same man who built the Taj Mahal.

Via Places to visit

The land of colors becomes even more colorful during the festival of Holi, the celebration of spring.

Via Unbelievably intricate Temples (Must see!!)

The Ranakpur Jain temple - built from marble - is considered to be the most magnificent of all Jain temples.

Markets are among the most exciting ethnographical attractions of India.

The beaches of Goa are stunning and the reason why it is the party capital of India.

One of the most popular natural attractions in India, Jog Falls is the country's 2nd highest waterfall.

12. Light of the Gods, Khajuraho

Source: amazingsnapz.com
Mumbai has some of the most amazing modern architecture in India. Each room here has a floating balcony swimming pool.

Via It's a beautiful world

Don't you just love how the old fort gate has become part of the 500+ year old Banyan tree?

The Mandore gardens are made up of charmingly landscaped areas and high rock terraces that are home to a collection of temples and memorials, a museum and the Hall of Heroes.

16. Descent of the Ganges, Mahabalipuram

Another World Heritage site, The Descent of the Ganges is a massive carved rock monument. It faces east towards the ocean on the Coromandel Coast.

Via some times...past reflects in future....

One of the largest mosques in India.

This beautiful mountainous region is subject to disputed ownership between India and Pakistan.

High altitude Tsomoriri Lake is fed by the spring snow melt waters of the Himalayas.

Via Once Upon A Story...

Also known as The Palace of the Winds or The Pink Palace, its distinctive shape represents the crown of Krishna, the Hindu God.

The ancient temple is of huge significance to the Tamil people and is located in a city that's 2,500 years old.

Via The Light Bridge

Bridging the Hooghly River, it connects the cities of Kolkata and Howrah.

Elephants are decorated for many of the festivals in India.

Via Baha'i House of Worship (Lotus ...

The première house of Baha'i worship in India. Baha'i temples are open to all denominations.

Gadi Sagar is home to a large number of shrines and cenotaphs. Located in a remote city in the Thar Desert, the lake is a popular leisure destination.

The Camel Fair began as a livestock sale but now is one of the state of Rajasthan’s great tourist attractions. The five day festival is full of camels but also so much other entertainment.

The elaborate decorations of the oldest and most well known Jain temple in India. Thanks to an avian veterinary center in its grounds, it is also known as the Jain Bird's Hospital.

Built in the 9th century, the well has 13 storeys, 3500 narrow steps and descends 100 feet, making it one of the deepest step wells in India.

Just one of 38 scenic lookouts at the Matheran hill station.

Source: twitter.com
The monastery was built into the honeycomb caves in the 12th century.

Not many train stations around the world are this interesting.

"The Gateway to the Garhwal Himalayas" is a place of pilgrimage and where the Beatles came in the 1960s to write their "White" album.

Source: flickr.com
The hall is a essentially a museum and art gallery to the history of India and Kolkata in particular. It holds regular special exhibitions.

Source: 500px.com
No list of sights of India would be complete without a tea plantation.

The cliffs at Varkala are unique for being the only cliffs on the southern Kerala Coast on the Arabian Sea.

Galtaji is an ancient pilgrimage site for Hindus.

Piles of spices in the markets add to the heady aromas of India's streets.

Via Unbecomingly a foxing — Downtown ...

The antique architecture is such a contrast to Mumbai's modern skyscrapers.

Source: 500px.com
Don't know where it is but it's simply stunning (possibly Kerala).

Udaipur was the historic and last capital of the former kingdom of Mewar. The palace was built over a period of 400 years by several rulers.

Via Upon the wings of dancing ...

The lake is also known as Shiva's Lake. The gold tipped mountain in the background is Thalay Sagar.

The Kerala backwaters form 8% of India's total waterways. They provide a living for farmers, fishermen and traders and are a popular tourist destination.

Source: panoramio.com
Delhi's Red Fort is another of the magnificent sights of India attributed to Shah Jahan, the 5th Mughal Emperor and the man behind the Taj Mahal. It was built in 1648 as the fortified palace of Shahjahanabad, his capital.

Millions of clothes are washed every day in this open air laundry.

Via Elephant in front of Tanjore ...

This is one of the largest Hindu temples and is made entirely from granite. It is part of the UNESCO World Heritage Site known as the Great Living Chola Temples.

Via Leap of faith

The 200 acre area is adjacent to the Qutub Minar World Heritage site and the Qutb complex and is home to tombs, temples, mosques and a step well.

A tribute to millennia of Hindu culture opened in 2010.

Source: joguru.com
Built from yellow sandstone, Jaisalmer is known as the "Golden City" and is a World Heritage Site.

Via All that's left

Highways and trails follow the natural geography of the Himalayas.

Imagine New York traffic jams at the height of the rush hour. It doesn't come anywhere close to a busy Indian street - anytime.

The peace and quiet of life on the water.

Gaudily-colored buildings, men playing cards and sacred cow lying in the road - it could only be India.

The tomb was the first "garden-tomb" on the Indian sub-continent and was also the first to use red sandstone on such a scale.

Via Vietnam Holidays and Vietnam Tours ...

With tombs dating back to 1444, the gardens are a pleasant place to take respite from the heat and dust of the city.

The "Tea City" sits at an elevation of 6,710 feet in the Himalayas.

One of the most recognizable sights of India, the accepted theory for the construction was as a commemoration to the end of a plague.

Built by Shia Muslims, the mosque is in the Bara Imambara complex and is among the most grandiose buildings of Lucknow.

Via A Serene Sunrise

Kovalam is one of Kerala's beach towns and its name reflects the endless lines of coconut palms.

Source: blog.travelpod.com
There's a total of 34 monasteries built side by side in the wall of a high basalt cliff. Interestingly, the monasteries are a mix of Buddhist, Hindu and Jain.

Via Rock-solid dwellings carved from cliffs

What's so incredible about this temple, other than that is more than 1,200 years old, is that it was carved from the top downwards.

Via Shiva in deep peaceful funk ...

This is the world's 2nd tallest statue of Shiva and stands at 123 feet.

Via The Largest Gate in the ...

The tallest gateway in the world. Also known as the Gate of Magnificence, it stands 54 meters high.

Huge status are among the many great sights of India. This statue of Maitreya stands 49 feet tall.

Currently under construction, Namaste Tower is one of many futuristic skyscrapers in Mumbai. The city has more high-rise buildings than any other city in India and there are always plans for new, high-design towers.

There are so many fabulous sights in India. Wherever you choose to travel in the country, you can guarantee a packed itinerary. What would interest you most to visit there - the religious monuments, the architecture or the natural attractions?