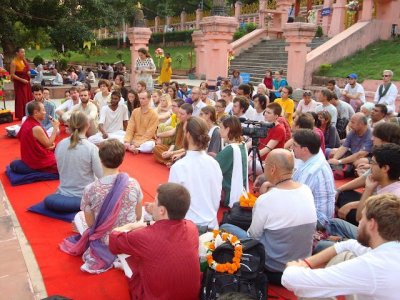 Pilgrimages are the original form of vacation when people would set out, often on an incredibly large journey to pay homage or for a cause. There are so many things wrong in this world and opportunities to change them – emulating an inspiriting pilgrimage may be the way to go about it. Laws, rights and history have been changed for the better thanks to a pilgrimage – religious or non-religious - getting together for a great cause with a sense of community comes alive. If you and/or others feel a moment of change is about to arise then follow these 10 Inspiring Pilgrimages to Emulate for encouragement.

1. March for Jobs and Freedom, US

This has to be one of the most famous pilgrimages, marches and causes in American history. Over 250,000 people joined in this march to Washington D.C. and listened to Martin Luther King’s ‘I have a dream’ speech. This speech and march led to a huge development in the Civil Rights Movement.

Another hugely famous non-violent protest that saw Ghandi and 78 followers walk from Sabarmati Ashram to the sea at Dandhi, Gujurat, to protest against the British salt tax. The Salt Satyagraha march started on March 12 and ended on April 5 in 1930 and raised awareness of Britain’s colonial rule over India.

This pilgrimage is a 310 mile (500 km) long trail which traces the path of St. Paul whilst he preached Christianity. An important trek which anybody can emulate through the beautiful scenery between Perge or Aspendos to Antioch in Pisidia. The route passes through refreshing forests and pristine crystal-clear lakes.

The Gaya District of Bihar is the spiritual heart of Buddhism in India. This is the land of the famous fig tree (the bodhi) which Buddha Gautama meditated under for seven weeks in the quest for Enlightenment. The place that gave birth to a symbol, the tree that lives there and the Mahabodhi Temple are the holiest sites for Buddhists and an inspiring area to visit.

This famous pilgrimage takes place in Kent, and is dedicated to various historical icons and stories of faith and religion. You may want to go to the stunning Canterbury Cathedral to commemorate Archbishop Thomas Becket’s murder on the altar by the knights of King Henry II in 1170 – who instantly became a martyr for the privileges and rights of the Church. Or you may want to visit the subject-matter of Chaucer’s Canterbury Tales. Either way, you may want to go to gain inspiration from a canonized holy figure that warred with a king.

This is an extremely serious pilgrimage to take part in, and is incredibly inspirational to others if you perform it using its traditional rules. Pilgrims retrace St. Patrick’s steps as he brought Christianity to Ireland; you can embark on an austere journey around the Lough Derg island, or climb Croagh Patrick, which is traditionally done barefoot (ouch). However, you can go to easier-going sites like the town of Downpatrick which hosts St. Patrick’s grave and a museum dedicated to him.

This is an inspirational area to visit if you want to emulate the hard work of missionary Reverend Robert Moffat, who set up the Cathedral of Kalahari in the Northern Cape in 1838. He also translated the Bible into Setswana to spread the word of Christianity.

This is in Kraków and mixes together religion with royalty better than anywhere else in Europe. On Wawel Hill, there is a 14th century cathedral that hosts 18 chapels and a stunning cluster of tombs. It is a path worth taking to see Kraków’s Route of Saints that links together sixteen picturesque churches.

This trail saw over 70,000 Mormons trekking through harsh and unforgiving lands to reach Salt Lake City and is representative of fighting for one’s cause. In 1846 the Mormons moved from Nauvo, Illinois to Utah in order to find a place they could practice their creed in peace. They used wagons and handcarts across 1,300 miles (2,092 km) over rugged and rocky plains. Not all survived, but those who did arrived at Salt Lake City in 1847.

This is the most romantic of pilgrimages. After the wife, of Edward I died in 1290, Eleanor of Castile, the king was completely distraught and left with their seventeen children. Edward I set the path of an arduous pilgrimage: he requested for her body to be carried from Lincoln to London, a distance of 108 miles (174 km) for her funeral. Wherever the cortege rested, the king asked for a memorial cross to be built. So, if you choose to follow this route, look out for the memorials and go to Charing Cross, named after a demolished Eleanor cross that once stood there in the hamlet of Charing.

Emulating pilgrimages can be inspirational for great causes and a wonderful look-back to significant historical and religious events. A challenge, or a scenic route, any lengthy journey for a greater cause shows vigilance, determination and passion. Have you done any of these 10 Inspiring Pilgrimages?