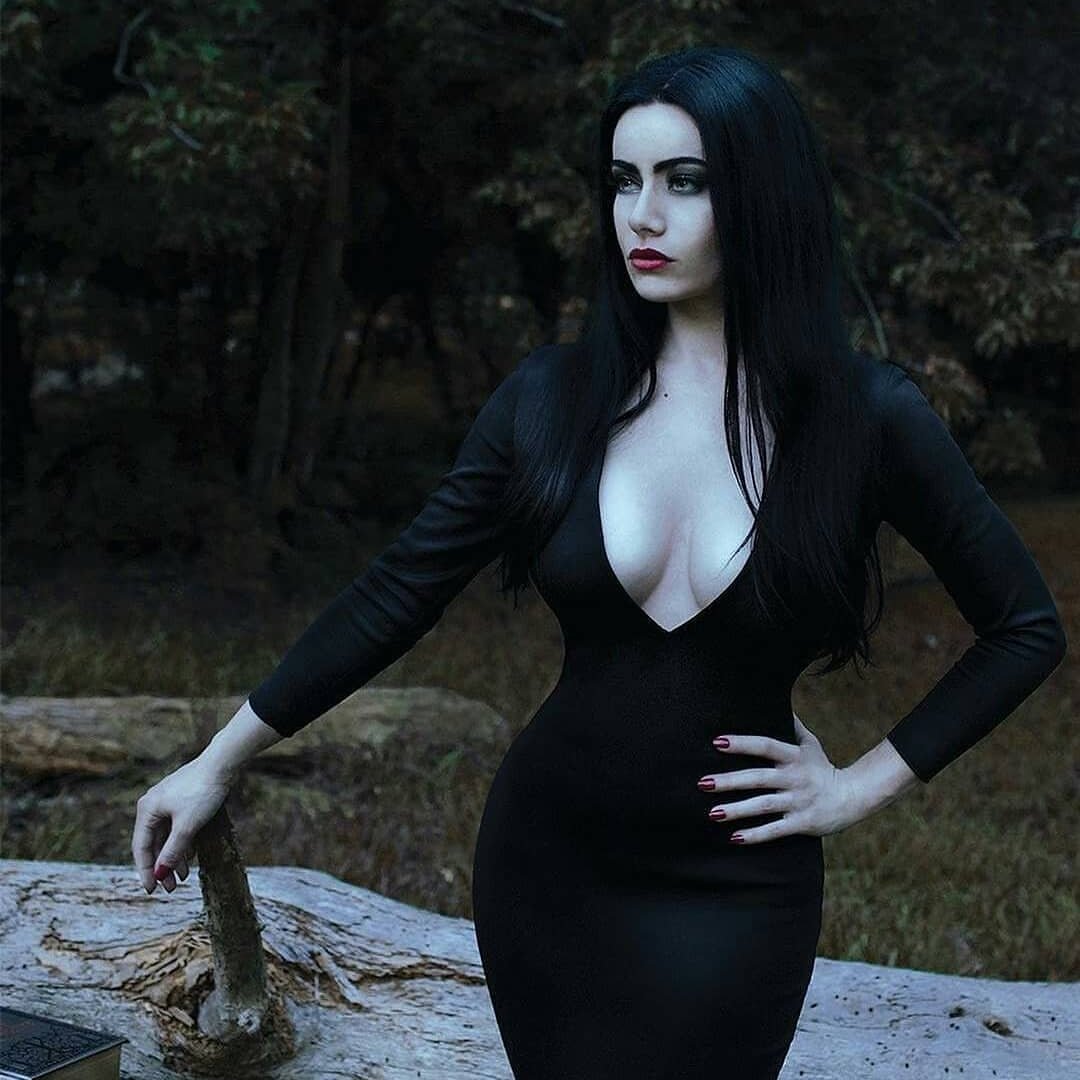 Ok – hands up; who wants to know some scary places to visit on Halloween? The festival is a wonderful time to celebrate all things ghoulish and ghostly, but if you want a place where things are as black as hell and things really do go bump in the night, you might want something a little more scary than your neighbor’s annual backyard decorations and trick or treating after sundown. I can’t promise you’ll hear ghostly wailings or see creepy apparitions, but here are some really scary places to visit on Halloween.

1 Island of the Dolls, Mexico 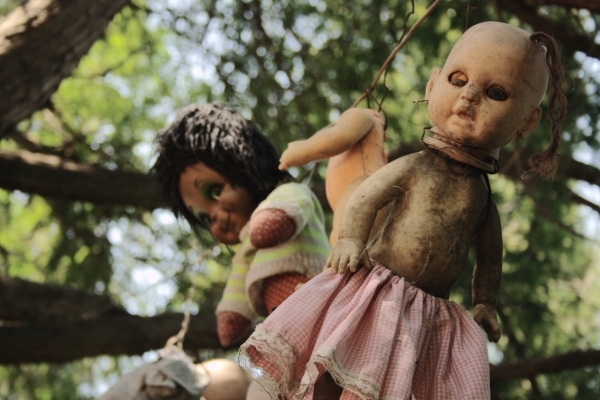 I was never a one for dolls when I was a kid. I didn’t like the idea of them lined up watching me when I was asleep. For that reason, for me, one of the really yucky places to visit on Halloween has to be the Island of the Dolls. This creepy island is in Xochimilco in Mexico City and is the work of Julian Santana Barrera. Xochimilco has a network of islands in its canal system and Barrera found a dead body floating in the water. After his discovery, he collected old and discarded dolls and doll parts to hang around the trees of his island to ward off evil spirits. Visit the island by boat on Halloween but be sure to leave by sundown because all those creepy dolls will have their (glass) beady eyes on you. 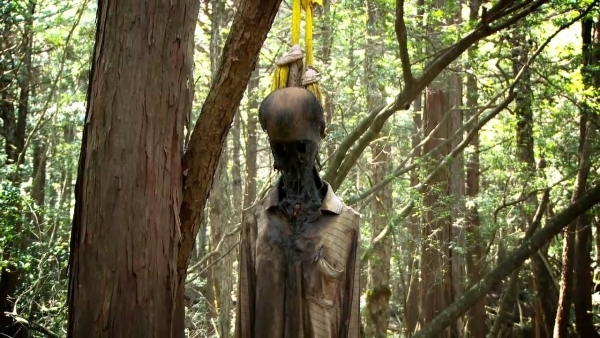 Are you a fan of the Blair Witch Project? Wanna make your own scary Halloween video? Head to Aokigahara Forest at the foot of Mount Fuji and you might just get more than you bargained for. Why’s it so scary? Well, firstly, it has long been associated with demons in Japanese mythological tales and secondly, eww gruesome, it is second only to San Francisco’s Golden Gate Bridge as the world’s most popular place for suicides. The forest is eerily quiet due to the density of the trees muffling all noises, including the wind. Fancy joining the annual body hunt? 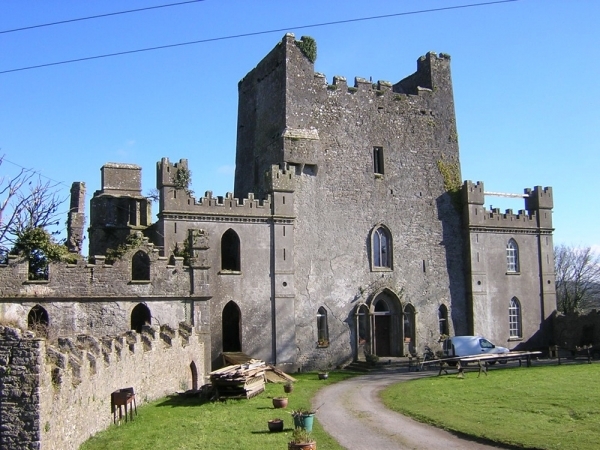 Recognized as one of the most haunted castles in the world, Leap Castle is definitely one of the scary places to spend Halloween. Not content with one ghost, ancient Leap Castle has a whole parade of them. Some of them are people who were imprisoned or executed in the castle over the centuries, but the star attraction is “It”. It is said to be about the size of a sheep with a decaying face accompanied by a smell of sulfur and decay raised from the spirit world by a previous owner, Mildred Darby, when dabbling in the occult. There are numerous elementals and shadows, the Red Lady, two young girls and also the Murder Hole Room. Hmmm, sounds like a real party place for Halloween. 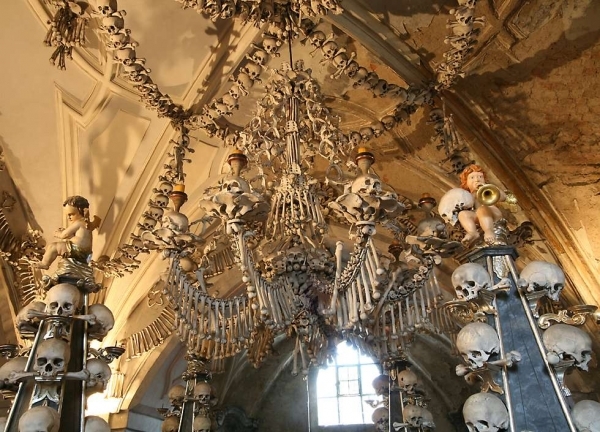 Ossuaries are not uncommon in Europe. An ossuary is by definition a place for bones. It can mean a chest/container of some kind or a room, but what makes some ossuaries spooky places to visit on Halloween is that they are no ordinary places of storage. Some ossuaries, like the one in Sedlec, are bizarre and macabre works of art where the bones of many thousands of people are displayed and are even used in the construction of the chapel, church or room. You’ll find things like bone chandeliers, garlands of skulls and even seating made of bones. Trés creepy indeed! 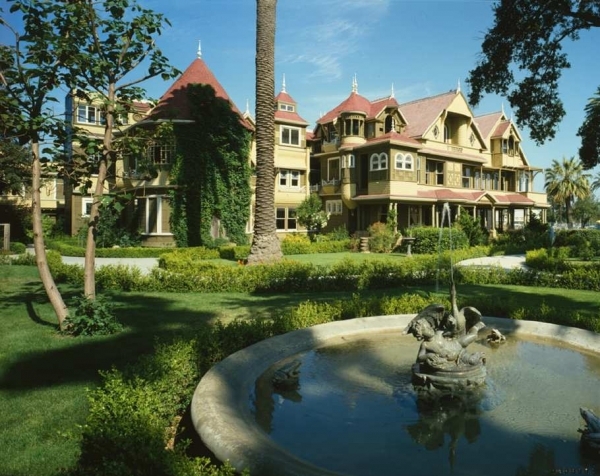 A house doesn’t have to be haunted to be spooky and give you a case of the willies. Sarah Winchester (yes of the rifles dynasty) lost her family, and in determination to ensure her house wasn’t haunted by their ghosts concocted the most amazing blue print for her mansion. In the Winchester Mansion in San José, which has 160 rooms and mile long hallways, there are doors that open on to brick walls and staircases that lead to ceilings and any number of secret passages. There are spider web motifs everywhere and various things themed around the number 13. Very weird. 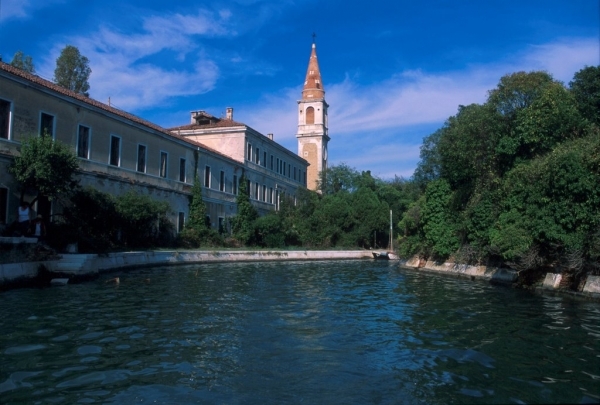 While the Black Death was sweeping across Europe in the mid 14th century, various ways and means had to be found to quarantine and dispose of the thousands of bodies. In Italy, they used “lazaretti” – plague pits. One such lazaretto was the island of Poveglia, close to Venice. It is believed that tens of thousands died here, and then to top that, in 1922, a mental hospital was constructed on the island and it is said the doctor who ran the facility was a case for being an in-patient himself , reputedly torturing and butchering his patients before going mad himself and committing suicide. 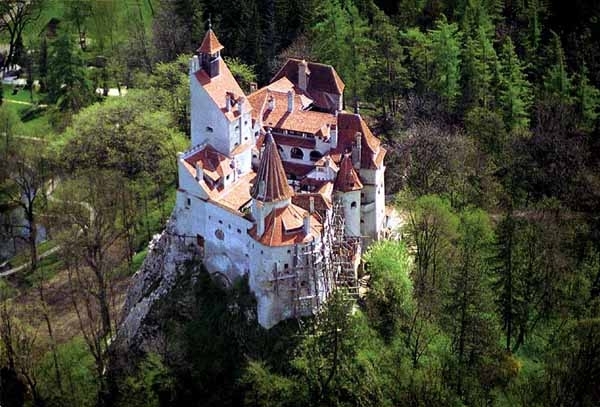 Can you think of any more apt or scary places to spend Halloween than Bran Castle – the very home of Vlad the Impaler, said to be the inspiration for Bram Stoker’s Count Dracula. Even by 15th century standards, Vlad was exceptionally cruel and his idea of fun was a day of maiming and murder. Today the castle perpetuates the legend with displays of vampire masks, wooden daggers and blood-red wine in its dark stone rooms and along its winding staircases. 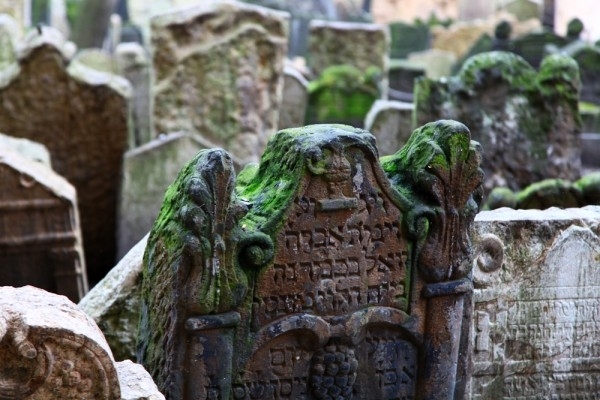 Hands up who knows the scariest places to spend Halloween. Who said cemeteries? Naturally, so if you’re going to visit one, then make it a goody. Prague’s Old Jewish Cemetery is a prime candidate. It’s not just one cemetery but 11 (yes, eleven) cemeteries piled on top of each other. There used to be a law forbidding the burial of Jews outside the Jewish Quarter of Josefov so they just kept stacking the bodies up. It is estimated there are 12,000 gravestones crammed into the space which contains an estimated 100,000 bodies. 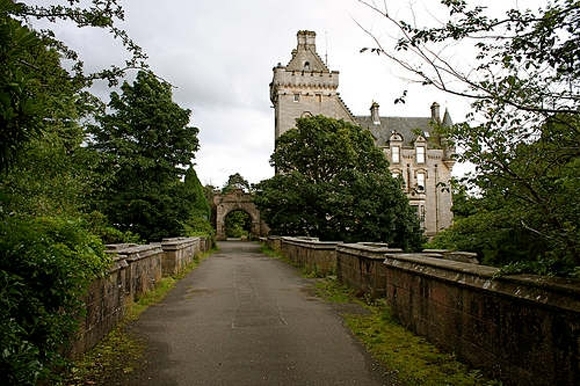 Eww! And aww! This is definitely not one the places to visit on Halloween if you’re an animal lover. The arched bridge that guards the entrance to the 19th century Overtoun Estate in West Dunbartonshire in Scotland is a very bizarre place indeed. Ever since the 1950s, and at the rate of one a month, dozens of dogs have committed suicide by leaping off the bridge into the waterfall 50 foot below. Investigators theorize that the reason is that there is a strong smell of male mink urine in the undergrowth underneath the bridge that lures the poor doggies to their death. 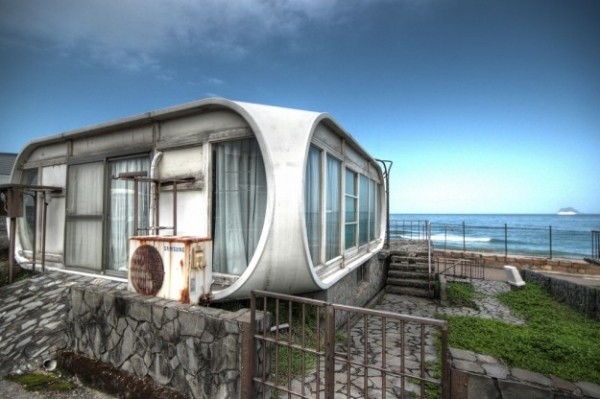 San Zhi was meant to be a flashy retreat for bored rich folk, but after a series of very mysterious fatal accidents on the construction site, it was abandoned in the 1980s. Today it is a ghost town of 90 weird hockey puck-shaped pods in the middle of nowhere. Like many things in China, it is shrouded in secrecy and all we really know is that locals don’t dare go near the place. Best visited on Halloween then, obviously! 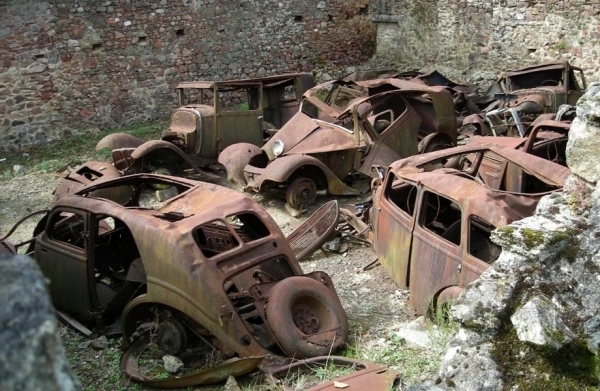 There are probably few ghost towns that have the poignancy of Oradour-sur Glane. What you see today is the remains of the village in the state the German forces left it after massacring practically the entire population in 1944, during World War II. 200 soldiers killed 642 French people. After the war, the French President declared the village would remain as a memorial and museum. I’m sure it’s “fine” in the daytime, but at night, I’m sure it makes one of the ideal scary places to visit on Halloween. 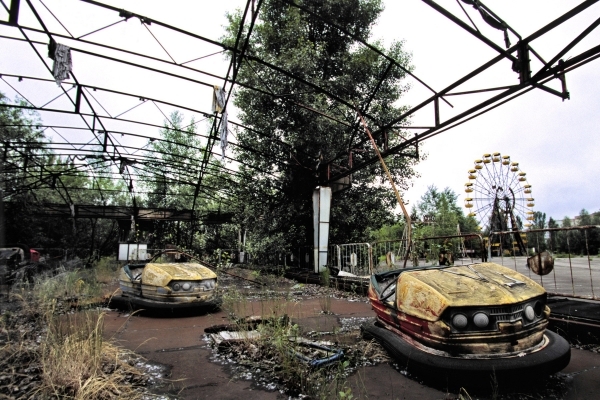 There are different fear factors and the thought of being contaminated by nuclear radiation is very scary even if not usually associated with Halloween. Though not typical of the festival, you actually probably wouldn’t want to spend any time at Pripyat on October 31. This is the infamous place that became a ghost town after the Chernobyl leak in 1986. Pripyat was indeed a real town, built entirely to service the needs of workers at the plant, complete even, with a full size amusement park with Ferris wheel. Nowadays, tours run to the town (declared a site of minimal radiation) for visitors to view what totally looks like a post-nuclear holocaustic landscape. 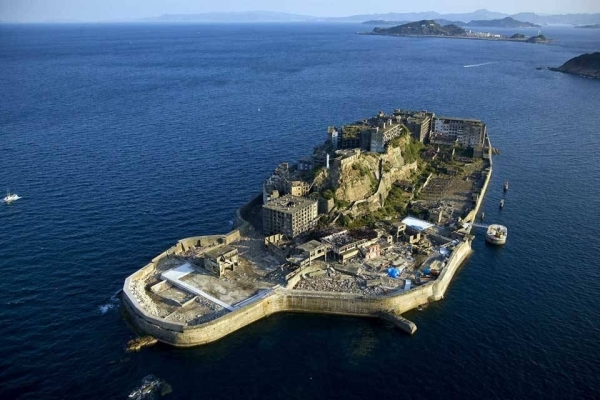 These just something about previously inhabited, now abandoned and deserted islands that make them ideal as places to visit on Halloween. Hashima Island, not too far from Nagasaki (now there’s a name to conjure with!) is a perfect example, and boat trips are available to take fearless visitors over to what was once a very busy coal mining facility. It’s not known as Ghost Island for nothing. If any of it seems familiar to you, it’s because it features in the James Bond movie - Skyfall. 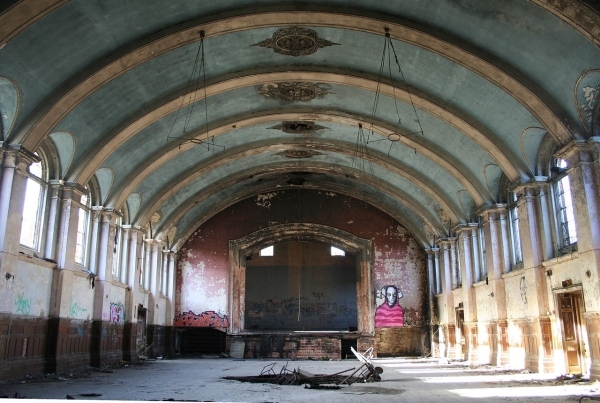 What comes next to abandoned islands as scary places to visit on Halloween? Why, abandoned mental hospitals, of course. And could this one have a more apt name? It’s hard to believe that it was only abandoned as recently in 1994 because it was the careworn and dilapidated feel of a Victorian insane asylum. Spend some time here alone and you may well feel exactly like one of its former inmates. 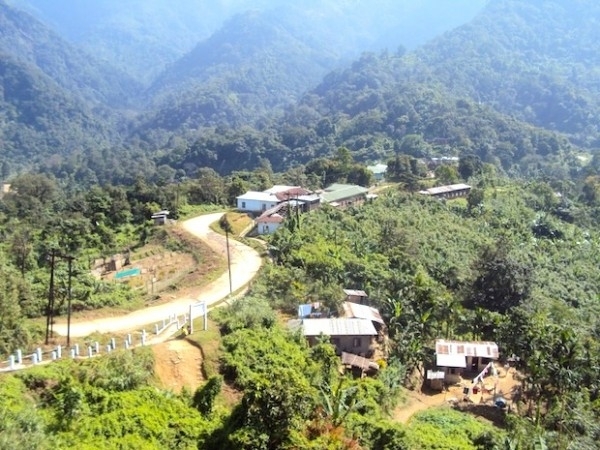 Ok, so we’ve done the dog suicide place, now it’s the turn of our feathered friends. No-one can agree on what makes birds fly into the village of Jatinga in Assam in Northeast India and plunge to their suicidal deaths, and what makes it even more spine-chilling is that it happens only between 7 and 10pm, in a very specific area of land, and as regular as clockwork for the past 100 years. Plus – it’s all kinds of birds. So far, more than 40 species have been identified among the kamikaze birds. 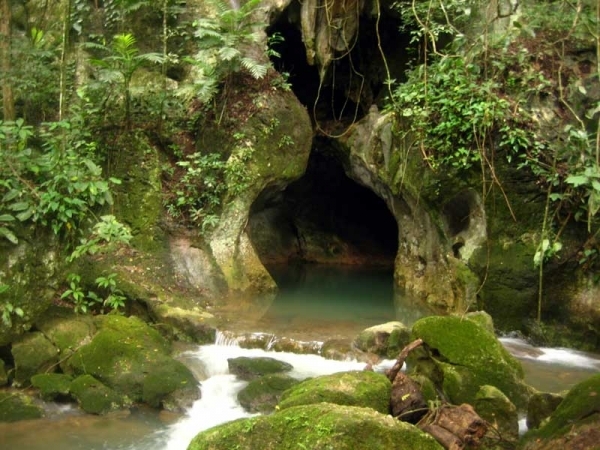 The death rituals of ancient civilizations always seem macabre to modern sensibilities, and that’s probably why so many of them feature in Halloween tableaux in some way. If you want to get in touch with Mayan culture at Halloween, the creepiest place has to be Actun Tunichi Muknal in Belize. Archeological remains point one of the chambers of the cave as being a place of human sacrifice or ritual killings. Disturbingly, many of the remains - all of which show their skulls being crushed to death – are children and teenagers. If you’re lucky enough to engage a tour guide to take you on a trek through rainforest jungle, a swim through a cavern lake, show you how to dodge huge cave spiders and navigate labyrinthine tunnels, you can see these ghoulish remains. 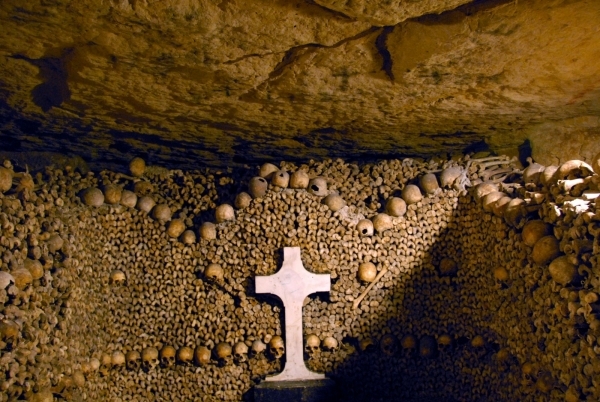 Creepy, cold, dark, damp, oh and dead bodies – all the ingredients needed for places to spend Halloween, and the perfect description of the Paris Catacombs. Another of the world’s great ossuaries, the catacomb network runs under the city for about 280 km and contains the remains of approximately 6 million people. Now a famous tourist attraction, the Paris Catacombs are open to visitors. 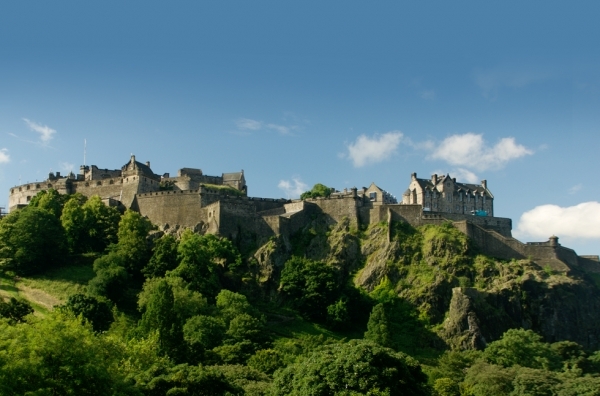 Who doesn’t love the idea of a scary haunted castle? Can any self respecting castle not be haunted? Edinburgh Castle is right up there among the spookiest. There is a whole litany of spooky stories and its family of ghosts includes a headless drummer, a spectral dog and a phantom piper. Visitors have reported sudden falls in the temperature and also felt unseen “presences” tugging at their clothes. 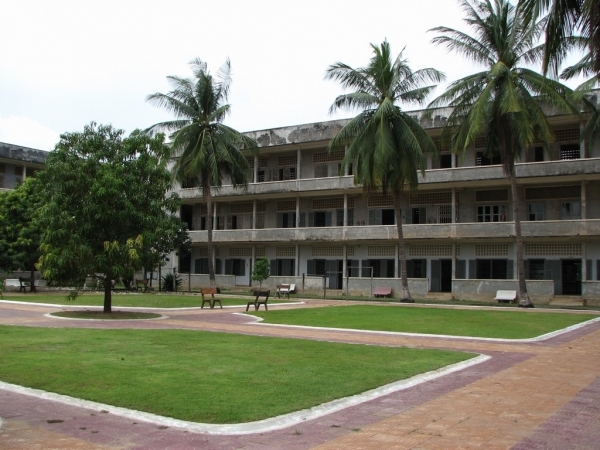 I have found it very interesting that while researching the scariest and creepiest places to spend Halloween that outside of Japan, there are very few places in South East Asia – maybe because of the differences in and attitudes to spirituality in their religions? One very scary place however, that stands as a memorial to the horrific genocide under Pol Pot’s Khmer Rouge in the 1970s, is the Tuol Sleng Museum in Phnom Penh. This former high school was prison to up to 20,000 people between 1975 and 1979, many of them tortured and murdered. If you want a terrifying scene to view on Halloween Tuol Sleng will treat you to skulls, instruments of torture and photographs of former inmates.

Are you scared now? I’m not sure I would have the nerve to stomach any of these places to visit on Halloween or any day of the year. How about you?