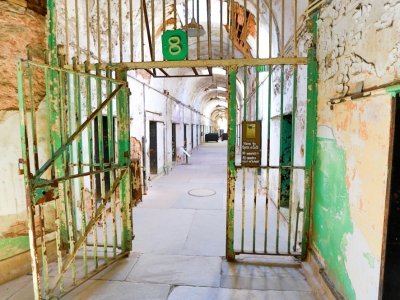 You don’t have to wait for Halloween to enjoy the haunted places of the world. Places where unexplained happenings occur, things go bump in the night (and day) and ghostly apparitions abound hold fascination for many of us. If you want to be scared out of your pants, you might want to visit some of these most haunted places in the world.

1. Island of the Dolls, Xochimilco, Mexico

One of the creepiest and most haunted places in the world is located on Lake Teshuilo in Xochimilco. In the 1920s, three girls were playing near the water, when one fell into the murky lake and drowned. The locals believed the dead girl’s spirit was trapped on the island. A bit later, in the 1950s, despite having a family, Julian Santana Barrera moved to the island to become a recluse. At the time, he was unaware of the tragic tale of the girl’s death, but as soon as he moved to the island, the little girl’s ghost started speaking to him, telling him that she was trapped on the island. Julian began delivering dolls to the ghost as gifts. As time went on, the girl’s appetite grew, and Julian felt that she wanted him to join her. He confided in his nephew this fear, and the same day, upon returning to the island, Julian’s nephew found him drowned in the exact spot where the girl had drowned seventy years prior. Today, the island is full of dolls, hanging from trees. Tourists sense the dolls’ eyes following them and claim the inanimate objects whisper. Both Julian’s ghost, as well as the girl’s, are said to still be trapped on the island.

The Bhangarh Fort in India’s Rajasthan was built in 1537, and today remains alongside a number of old palaces and temples. The fort’s curse originated through a wizard who, falling in love with Banghar’s princess, used black magic to draw the princess to him. However, the princess was not fooled, and threw the bowl of magic potion against a boulder. The boulder began to roll toward the wizard and, in despair and anger, before being crushed to death, the wizard cursed the town, commanding its destruction. The town was invaded and pillaged not long after, and the princess, along with the town’s inhabitants, were killed. To this day, the fort is haunted by those who were killed.

Eastern State Penitentiary is a former prison in Philly, built in 1829, known for introducing solitary confinement as a form of rehabilitation. Being as such, it was only a matter of time before prisoners would be driven insane and start to haunt the place as only the insane can. Put in complete isolation, even when leaving their cells inmates would have a black hood placed over their heads in order to remain confined. Closed in 1971, the former prison has seen paranormal activity since the 1940s, and the activity has only increased since the prison has fallen into disuse.

4. The Tower of London

Haunted by royalty, the Tower of London might be the classiest of the most haunted places in the world. Standing tall for over 900 years, the most haunted place in Britain was formerly used as a prison, and has seen the executions of some of Britain’s most notorious figures. Anne Boleyn, one of King Henry VIII’s many wives, was notoriously beheaded here for her inability to produce a male heir. Her headless ghost now haunts the place, pacing the Bloody Tower at night. Dogs even avoid entering the premises of another area of the towers, known as Salt Tower. Too, it is said that in 1864 a fight with an apparition made a soldier pass out cold. Many spirits roam the Tower, making the Tower of London a haven for those who wish to frighten themselves to death.

Amongst the saddest of the most haunted places is Suicide Forest in Aokigahara, at the base of Mount Fuji. Infamous for being the site of hundreds of suicides over the years, so many people come to kill themselves in this dense forest that the local police have been known to do regular sweeps in order to clear the bodies. Though a public record for the number of bodies discovered is no longer made available, 108 people committed suicide there in 2004, alone. The police have now posted signs around the forest, with messages reading, “Please consult with the police before you decide to die,” and “Your life is a precious gift from your parents.” The souls of those who’ve killed themselves are said to haunt the place, but others believe the area is also haunted by those who died of famine in ancient Japan. When people were starving to death, some would be abandoned in Aokigahara, where their souls are said to inescapably remain.

Built in the 11th century, the haunting of the Château de Châteaubriant in France didn’t begin until the 16th century, when the sad tale of Jean de Laval and his wife Françoise de Foix begins. De Laval was requested at court by King Francis I, and when Françoise accompanied him, she became the queen’s lady-in-waiting, as well as King Francis’ mistress. In October, 1537, Françoise died mysteriously. It is said that de Laval locked her in a room and poisoned her when he found out about the affair. Every year, on the anniversary of her death, Françoise’s apparition traipses through the halls of the Château.

Have you ever seen Shutter Island? Well, watch it, then tell me that asylums are not the scariest places EVER. Scratch that – abandoned asylums are the absolute scariest, and Australia is home to one of the most haunted abandoned asylums in the world. Located in Victoria, Australia, the Beechworth Lunatic Asylum was active between 1867 and 1995. During its 130-year history, over 9,000 patients died in the asylum’s rooms, and these mental patients’ spirits haunt the abandoned place to this day. And, nothing is worse than a mob of clinically insane ghosts!

Are any of these haunted places on your wishlist to visit any time soon?