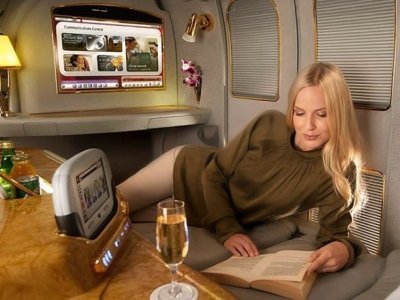 By far one of the main reasons first class flights cost so much is the major difference in seating. In economy you are squashed in like cattle with minimal leg room. Even before recent innovations (which I’ll come to in a sec), the seats in first class were more like armchairs than airplane seats. No tough, first class seats are a feat of modern engineering. In economy, if you want to sleep you worry about your head lolling and drooling on your neighbor’s shoulder. In first class, depending on the airline, you get a seat that converts to a bed, sometimes even with inbuilt curtains and sound insulation.

One of the more recent regulations that causes us hassle is the restrictions on liquid. If you like to freshen up on your flight, you either have to search out travel sizes (which are not cost efficient) or decant your favorite toiletries into small bottles (annoying). Do you think first class passengers suffer this? Of course not. The premium paid provides for on-board expensive brand toiletries. And that leads me nicely into …

… another of the reasons why first class flights are so expensive – the bathroom facilities. It depends on the airline but when you fly a premium class you are not limited to those horrid little cubicles. On Emirates A380s, first class passengers have a shower room – although there is some hardship – you are limited to a five-minute hot shower. If you fly a premier class with ANA you have a warm-water bidet to get your botty clean.

Now that you’re comfortable, clean and fresh, the next thing to be taken care of is distractions. You don’t want someone’s conference call, business meeting or conversation interrupting your reading or movie viewing. To ensure you can’t hear the whining from behind the curtain that separates economy from business class, you don’t have to pay for the use of a cheap pair of headphones. Fly American Airlines premier classes and you will be served with a pair of Bose noise-cancelling headphones.

I don’t really think that champagne on tap is one of the reasons that first class plane tickets cost so much. I think this is a perk that is well deserved by someone who shells out so much for what is essentially a comfortable seat. And it’s not just champagne. If you want a fine single malt whisky or a pina colada, no doubt one could be whipped up in no time.

There was a time that VIP lounges were the realm of the premium paying customers. Now though, various airline clubs, frequent flyer programs and even credit cards have made lounges available to non-first class passengers. So what happened? New VIP lounges were created. But some airlines push that envelope even further. Some will offer a limousine service that bypasses the whole waiting in the lounge experience. Qantas, for example, will send a chauffeured limousine to your home or hotel to drive you direct to the departure gate. This is after ringing you the day before to find out if you have any special requests for the journey/flight. You are fast-tracked through immigration and have a special boarding lane – it all adds up to zero waiting time.

You could say that all the reasons first class flights cost so much comes down to a simple issue of economics. The amount of space given over to first class could be used to provide a large number of economy seats. So where there might only be 12 first class seats, the space could be the equivalent of 30-40 regular seats. That’s 12 paying passengers compared to 30. It’s about balancing the numbers. This argument holds water when you consider how some first class cabins are fitted out. For example, Singapore Airlines has some A380 aircraft that actually have 2 suites built into the first class section. They have sliding doors for privacy, 78 inch beds (with turndown service ), leather seats and flat screen TVs.

So now you know how the other half lives, so to speak, and why it costs so much for a seat in that coveted cabin beyond the curtain. Have you ever flown first class?