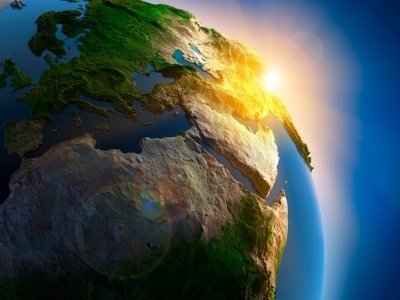 How many geographical facts about planet earth do you actually know? The Earth is one of those subjects that we’re taught bits about in school and we pick up facts and trivia as we go through life, but when we’re asked questions like how big is it, how much is land and how much is water, how far are we from the sun etc, we never seem to know the answer. Let’s change that shall we? Here are some facts about Planet Earth we probably all should know.

At the equator, the circumference of the globe is 24,901 miles. This is one of the most interesting facts about Planet Earth because if you ask someone to estimate the size of the equator they always go with a much smaller number.

Look at the sky and you’ll see the clouds moving. Another interesting piece of trivia about the Earth is you’re moving at about 1,000 miles an hour by standing still. This is because of the Earth’s spin and orbit as it moves around the sun. If you’re closer to the equator, you’ll be moving faster. So if you’re living in Texas you’re moving faster than someone in Wisconsin.

3 Distance from Our Star

We’re the third closest planet to the sun, but this doesn’t mean we’re close to it. One of the things you should know about the Earth is that the distance from the sun alters. Our orbit means we have to take an average as to how close we are to the sun. Astronomers use the figure of 92.96 million miles, but we could be as far as 94 million miles or as close as 91 million miles.

We call Earth the Blue Planet because it’s mainly made up of water. About 71% of the Earth is made up of water in oceans, rivers, and lakes. And this is growing as climate change takes hold.

6 What’s the Weight of the Earth?

In short, the weight of the Earth is a silly query to make. Weight is defined as the gravitational attraction on an object. So if you went to the moon you’d be back to your birth weight. It’s more proper to ask about the mass of the Earth. Unsurprisingly, it’s a lot. It’s 6,000,000,000,000,000,000,000,000kg. Yet with this heaviest of facts about the Earth out of the way, it leaves us questioning how anyone managed to calculate this. Isaac Newton came up with lots of complex science about how to measure spheres. In this equation, all we needed was the radius of the planet and the Constant of Proportionality in the Law of Universal Gravitation. Yeeeeeah, in short we used math.

Another of the things you should know about Earth is what this big floating ball is actually made of. If you wipe away all the humans and the upper layer, you get lots of iron, magnesium, nickel, and a whole lot of other elements. This is the upper layer known as the crust. The mantle, about 1,800 miles down, is made of silicate rocks with magnesium and iron. The rocks here move up and down through the core. This action is what causes all the plates to move. If we go further down, we get to the inner and outer core. The actual core of the Earth is 760 miles of iron surrounded by a nickel-iron alloy. It moves at a different speed to the rest of Earth, which scientists say causes our magnetic field. It is estimated the temperatures reach 10,000 degrees Fahrenheit at the core.

Here endeth today’s short lesson on the geographical facts about Planet Earth. I learned some new stuff. Did you?