11 Facts about Disney Parks That You Probably Didnt Know ... 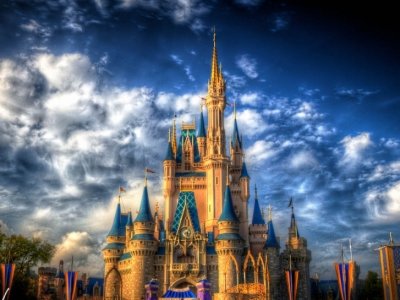 1 None of the Shops Sell Gum

This was actually really interesting to learn. None of the shops in Disney World sell gum, which is why you never see any stuck to the rides or sidewalks. That's very clever because we all know people just toss their gum anywhere and everywhere. However, Disney doesn't stop you from bringing gum in. So, if you are bringing gum to the park, just be respectful about it. You wouldn't want to step in gum while strolling along this magical place! The facts about Disney Parks just get better.

2 You Are Never Too Far Away from a Garbage Can

To keep people from just dropping their garbage on the ground, Disney is very resourceful. You're never more than 30 steps away from a trash can. So, hold on to that garbage! Allegedly, "Walt Disney himself went to other parks and watched how long people held on to trash before dropping it on the ground." That's some powerful research!

Can you believe it? There's a secret suite in Cinderella's Castle! Unfortunately, it cannot be booked. It's only used for promotional giveaways! That means there have been some lucky winners who have stayed there! I sure am jealous of them. I would love to be able to check out this secret suite.

There are fourteen opening day attractions in Magic Kingdom that are still running! The attractions include “Country Bear Jamboree,” “Dumbo the Flying Elephant,” “Frontierland Shootin’ Arcade,” “Jungle Cruise,” “Mad Tea Party,” “Peter Pan’s Flight,” “Prince Charming Regal Carousel,” “Swiss Family Treehouse,” “The Hall of Presidents,” “The Haunted Mansion,” “Tomorrowland Speedway,” “Walt Disney World Railroad,” “Walt Disney’s Enchanted Tiki Room,” and “It’s a Small World.” Isn't that crazy? These rides have so much history to them! Which one is your favorite to go on?

5 Parking Lots Were Named after Dwarfs

At one point, the Magic Kingdom lots were named after six out of the seven dwarfs. There was never a "DOC" lot because they thought people would confuse it with the ferry docks. Isn't that interesting, though? It would be so cute if they still had the lots! Kids would really love it being named after the dwarfs.

6 Smellitizers Can Be Found All over

Devices called "smellitizers" can be found all over the parks and are what emit certain smells in certain areas. You've probably noticed the scent of cookies and vanilla around “Main Street, U.S.A.,” salty sea air while you're in line for “Pirates of the Caribbean,” fresh citrus on “Soarin’,” and burning lumber near the scene depicting the fall of Rome on “Spaceship Earth.” All these smells are there for a reason. Have you ever noticed any of these smells?

7 The Lawn at the Haunted Mansion is Left Alone

While most of the lawns in Disney parks are tended to, the lawn at the Haunted Mansion is left alone. It's left to grow so it can match the mood of the ride. I mean, how scary would the mansion seem if the lawn was all clean cut? This is a really cool detail!

For one day only, Woody and Jessie dropped to the ground when "Andy's coming!" was yelled out. This was done for a special guest in the park and hasn't been done since. I guess it makes sense because it doesn't seem like it'd be too safe to just "drop dead" whenever someone screamed that out. Reportedly, Woody and Jessie were not fans of this.

There is a secret basketball court for the staff! It's located in the upper third of the Matterhorn ride at Disneyland. This is pretty awesome! I mean, even the staff has to have fun, right?

On the signs for Animal Kingdom, you can see a dragon. It's there to represent the scrapped area called "Beastly Kingdom." It was going to be dedicated to mythical creatures. How awesome would that have been? Dragons, unicorns, etc! I would definitely pay to enter that park.

So, there you have it! There are actually a lot more hidden fun facts about Disney parks. These are just some that really caught my attention. Which fact surprised you the most?