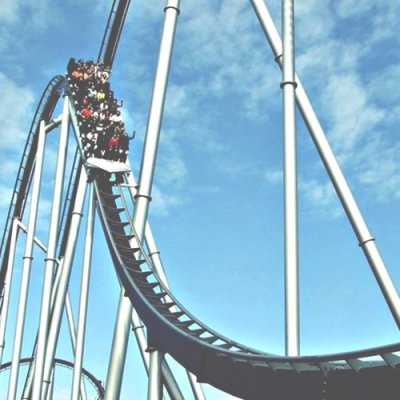 Do you feel like you've been on every theme park ride? Then what you need is something new! Theme park enthusiasts love to try a new ride. So what's new this year? There's plenty going on in the theme park world, with new rides and new parks opening all over the globe. So here are the brand new rides you should check out in 2015 …

Do you want to whizz around at speeds of up to 95mph? That's faster than you can legally drive on the freeway in most countries! Then you should head to Carowinds, a theme park on the North/South Carolina state line, and try out its new ride, Fury 325. Carowinds is cheaper than Disneyland and probably won't be as crowded, so head there if you're local.

Some rides have a really fun theme. Steampunk fans will want to check out the dive coaster Baron 1898, which is being introduced this year at Efteling, a Dutch theme park. With a freefall, zero-G roll and a fast spiral, this ride sure isn't for the fainthearted. Thrill-seekers only need apply.

3 Voyage to the Iron Reef (US)

Steampunk ride fans are spoiled for choice this year, as another steampunk ride is opening, this time at Knott's Berry Farm, south of LA. It's an interactive ride and so fun if you're looking for something a little more enduring than a rollercoaster. In fact, there are even entire theme parks dedicated to steampunk, such as Les Machines De l'Ile, in Nantes, France.

4 The Oath of Kärnen (Germany)

If you're in Germany, head for Hansa Park and try out their new ride, the Oath of Kärnen. It boasts a tower that's 79 meters high, and a track length of 1,235 meters. The ride will be one of the three highest hypercoasters in Europe, so if you like a new challenge this could be the one for you!

If you like your rides to be more traditionally scary, Canada's La Ronde park has just the thing for you. Rather than the thrills and scares coming from a rollercoaster, Maison Rouge is a haunted house walk-through attraction. It'll be open all year round, so you won't have to wait until Halloween. I doubt I'm the only one to find clowns pretty scary …

Zombie fans can fill in time waiting for the next season of The Walking Dead by heading to Mexico's Bosque Mágico. While it's not as fast as Fury 325, the 62mph speed is still pretty fast. Will you be accompanied on your ride by the living dead? You'll have to head to Mexico to find out!

If you yearn for the days of classic rides, you may be happy to hear that ZDT in Texas is opening the Switchback Railway, the first new wooden shuttle coaster in over a century. There are also wooden rides opening in China and Ireland.

So thrill seekers have a lot to look forward to in 2015! There are new rides opening up every year, so even familiar parks may have new attractions for you to check out. If you could open your own theme park, what would it be called, and what would the theme of your park be?