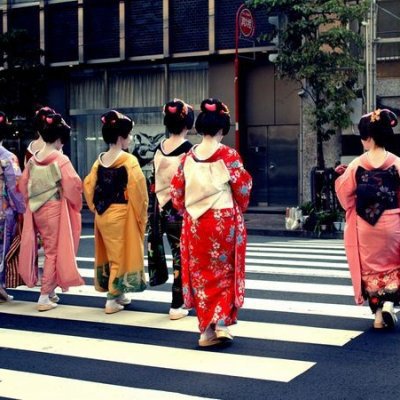 When I lived in Naples, Italy, one thing I didn’t like was crossing the road. I don’t know if it’s changed but back then, horns were used instead of indicators and drivers would sit at traffic lights with their hand on the horn, blaring at it to change. In the narrow back streets, motorcycles and those 3-wheel minivans would whizz about like in a James Bond movie. A look at some old photos prompted me to think about other places I’ve been and the rules of the road, ‘cos there really is an art to crossing the street in places around the world.

1. Any City in India

People say that the drivers are chaotic and reckless, but that is not the case. It simply looks that way to people from other countries. There are traffic police and rules of the road, but there are so many cars and so few police that people do not have to follow the rules of the road. For example, the rule of thumb with traffic lights is that if there are no police around you can run it. They are very careful when it comes to pedestrians, but crossing the road is still dangerous. It is similar to playing the old PC game “Frogger.” And yes, you do have to watch out for cows.

If you are going to cross the road, then do it with confidence. The most dangerous thing you can do is stutter step. Drivers assume you are going to move in one long motion and quickly. If you are hesitant, then you will mess up the driver’s timing and they will not be happy. Do not expect the traffic to yield because they won’t. And watch out for Vespas zipping in and out of traffic.

In the UK, you are able to cross the road safely for three reasons. Firstly, attitudes are not focused on “driver rules the road.” Secondly, the police get a lot of money from fining drivers so they are very keen on hiding in wait for you. Thirdly, licenses have a points system and it is very easy to get points, push up your insurance costs, and lose your license, whereas getting your license in the first place is very difficult. And actually, there’s a fourth reason. Even if you commit a road violation miles away from the police, the country is so loaded with CCTV cameras that you will still be caught. So, feel free to cross the road whenever you wish; just be sure to look left and right before you do.

Drivers are aware of you as you stand by the side of the road, and you should look for a space before crossing, but you also need to communicate your crossing very clearly. On crowded roads, you may see pedestrians lead small groups across the road acting almost like a traffic cop. If you are alone, make it very clear you are crossing, and give the drivers a wave or a signal for slowing down or stopping.

If you are new in the country and you want to know how to cross the street, then watch others cross the road first. It can be dangerous at times mainly because people have learnt that the rules of the road apply, but not all the time. As a pedestrian, you should try to cross at traffic lights, and you should also assume the worst. If you are very wary of road users, you will be okay. Some people cross themselves (Catholic/orthodox) before crossing the road.

In most cities and towns in Germany, there are plenty of crossing points. All you have to do is wait for the green man to show before you cross the road. The German people are used to being arrested for jaywalking, and this includes during the early hours of the morning when people are falling out of clubs drunk.

In this country, the major form of transportation is the motorcycle. There are two problems for pedestrians here. One is that the motorcyclists seem to be driven by homing pigeons on autopilot. They point in the direction they want to go, and go. Nothing gets in the way and they don’t want to stop or veer for you. The second is that the motorcycles are often a sight in themselves and foreign tourists are apt to stop and stare as they pass piled high with more stuff than a pickup truck or being ridden by whole families and the pet dog.

Where have you been where crossing the road is an experience?