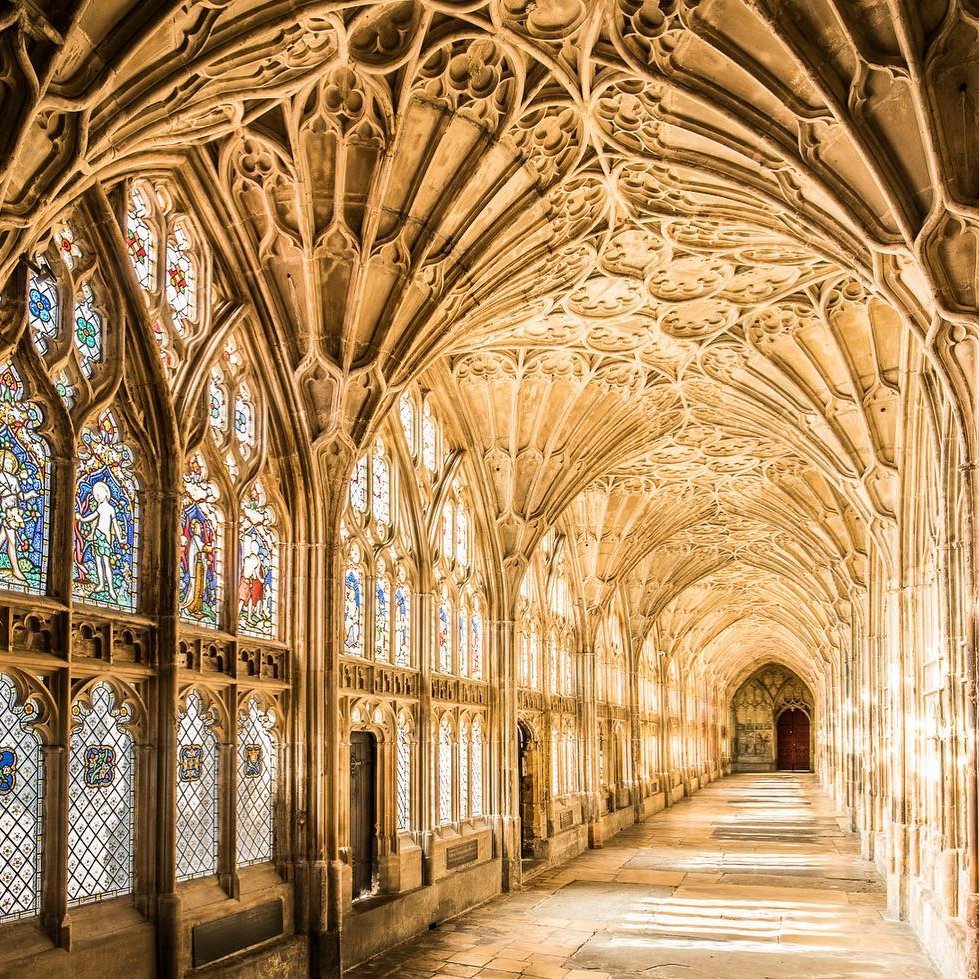 This fabulous castle in Northumberland features big in the places where Harry Potter was filmed as it is the location of Hogwarts School of Witchcraft and Wizardry. Remember the broomstick lesson and the Quidditch matches and Ron and Harry crash landing the flying car? All filmed in and around the castle. All of the outside shots of Hogwarts are Alnwick Castle. You can visit Hogwarts, erm, Alnwick Castle as it is open daily (summer months only).

This magnificent building in South West England is another place where Harry Potter was filmed that can claim top billing. The first stones of the building were laid sometime between 1072 and 1104 so it has seen plenty of history. Added to its story now are the Harry Potter movie scenes set here. The cloisters are used as the corridors of Hogwarts and are the setting for many of the ghost scenes and the overflowing bathrooms we see in The Chamber of Secrets also benefit from the fabulous backdrop of the cathedral.

Although the market has been in the same position since the 14th century (right in the heart of the City of London), it was the addition of the ornate roof of maroon, green and cream and cobbled paths added in the 1880’s that makes it so characteristic. In the Harry Potter movies Leadenhall Market is used to represent the area of Diagon Alley and The Leaky Cauldron. If you want to pass through the door of The Leaky Cauldron yourself, make an appointment for an eye test as it is now an optician (number 2-3 Bull’s Head Passage, nearest tube, Monument).

The places where Harry Potter was filmed really are some of Britain’s finest institutional buildings. The dining hall in Hogwarts is in reality the Great Hall and stairs of Oxford University’s Christchurch College. Christchurch is the largest of the Oxford colleges and is also the city’s cathedral. The college is open to the public every day except Christmas.

Fancy following in the tracks of the Hogwarts Express as t whisks all those witch and wizard students back to school? Surely, this is some of the most beautiful countryside of all the places where Harry Potter was filmed. The West Highland Railway Line wends its way from Fort William to Mallaig passing Ben Nevis and through Glen Nevis.

Do you recall the flying car scenes where Harry almost falls out? If you weren’t on the edge of your seat watching him cling on for dear life you will have noticed the Glenfinnan Viaduct in the background with the Hogwarts Express racing along its tracks. The viaduct carries the West Highland Railway Line 1000 feet across the Glenfinnan Valley 100 feet above the ground. Although not part of the British Rail network train rides are possible to view the breathtaking scenery on either side.

Both are major main line stations in London and easily accessible places where Harry Potter was filmed at any time of day 365 days a year. Platform 4 at Kings Cross is the screen’s Platform 9 and ¾ from where the Hogwarts Express departs and arrives. St. Pancras is a gorgeous listed building that provides the outdoor station scenes.

The Duke Humfrey’s library room in Oxford’s Bodleian Library doubles as the Hogwart’s School library – Hermoine’s home from home. The mass of ancient volumes that lends the movie scenes that gothic horror feel can be seen on guided tours.

You get two for the price of one with places where Harry Potter was filmed at the Bodliean. The library’s Divinity School doubles up as the sanitorium at Hogwarts. A surprising number of scenes take place in the sanatorium but we rarely get to see the crowning glory of gothic masterpiece of a room which is a ceiling painted with beasts and biblical scenes. Visitors have access during opening hours.

If you are horrified by the thought of giant spiders, centaurs and a bumbling giant have no fear. Black Park in Iver is a magical creature free zone. It is the Forbidden Forest in the Harry Potter movies but in reality it’s a pleasant, open access 600 acre park.

Some of the most palatial scene sets in the Harry Potter movies are the marble interiors of Gringotts Bank. In reality the Wizard’s bank is a secure area of Australia House, home of the High Commission of Australia, one of the stand out buildings on The Strand in London. You can visit the building but the specific part where Harry Potter is filmed is not accessible to members of the public.

Another fine example of English cathedral architecture used for various places where Harry Potter was filmed is Durham’s imposing example. Built in the 12th century, its cloisters are traversed by Harry carrying Hedwig, it was filled with a menagerie of animals to complete its transformation to a classroom and the Chapter House was used as professor McGonigal’s classroom. Open daily.

I hope you have enjoyed my tour around 12 Wickedly Wizardly Places Where Harry Potter Was Filmed. The amazing history of my country is so well represented in its buildings and they all stand in wonderful countryside or vibrant cities and towns. I never think anyone needs a reason to visit Britain but if you do maybe it’s to check out the places where Harry Potter was filmed. Do come soon.