7 Things to Never Say to a Flight Attendant ... 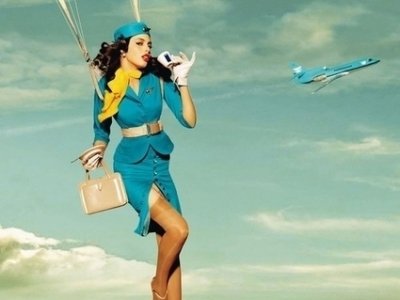 Flight attendants have a lot to do. This is one of the things to never say to a flight attendant. If you travel with your kids, then make sure you have something planned to get them entertained! It’s not the flight attendant’s job to carry your baby or to play games with your toddler.

It’s only polite to bring on a carry on that actually fits within the measurements. Lifting bags isn’t part of the flight attendants’ job descriptions. That means that if they get hurt helping you, they won’t get compensated. If you know that your bag is too heavy for you to lift, then please, just check it.

3 “This Food is Disgusting.”

The unfortunate truth is that most airplane food isn’t appetizing. But the flight attendants aren’t the ones cooking it. In fact, they’re eating the same disgusting food! Try packing your own meal if you really can’t stand airplane food. I do this, and it’s better than letting food just go to waste!

Flight attendants are not walking trashcans. They see enough gross stuff already. So if you have something that’s not a candy wrapper or a soda can, try to be considerate and toss it in the lavatory trashcan. Leaving trash in the seatback pocket doesn’t count!

5 “I’ll Put My Phone on Airplane Mode in One Second.”

On most flights, there’s an announcement that tells all passengers to either turn off their electronic devices or to put them in airplane mode. Those who keep using their devices only delay the flight even more.

Whenever I hear someone talk to anybody like that, I actually mentally smack him or her. This is no way to talk to anybody. This is a huge no-no especially if you use the call button – at least be polite! And speaking of the call button, only use if it you actually really, really need something. If you want some water, just head back and politely ask for some. Plus, ringing for a flight attendant during turbulence is one of the absolute worst things to do! No one should risk a sprained ankle because you need orange juice.

I admit that I’ve been guilty of asking this. But it’s not up to the flight attendant and he or she can’t actually do anything about it. Sure, it’s annoying to be delayed and stuck in the plane, but they’re going through the same thing, too. Plus, they get stopped every other row to hear the same complaint. So definitely try to not get mad at the flight attendant for the delays!

Being polite to flight attendants will pay off during the duration of the flight. If you immediately get on their nerves and are disrespectful, they won’t be as willing to help you out. Do you do any of these things? What other things do you think flight attendants don’t like?