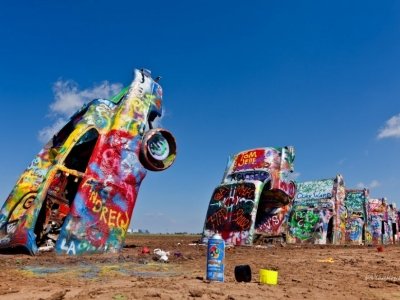 When you think of US attractions, the incredible cities, national parks, theme parks, historical monuments and iconic buildings and constructions come to mind, however, strange US landmarks probably don’t enter your thoughts. But, they are there and actually probably more numerous than you might imagine. Want to know some? Read on then for some strange US landmarks.

Set in California’s largest desert is the one of the strangest of strange US landmarks, the Salton Sea. Actually a lake produced by the 1905 flooding of the Colorado River, the Salton Sea is artificial, with salty waters and a surface that’s 220 feet below sea level. When the flooding occurred, 1500 workers moved a half million tons of rock to redirect the Colorado River, but with no outlet, the Sea now sits near Salvation Mountain, another strange site, created by Leonard Knight, a folk artist. The hand-mixed adobe and concrete hill, doused with acrylic paint and the motto “God Never Fails,” stands 100 feet high on the lake’s eastern edge.