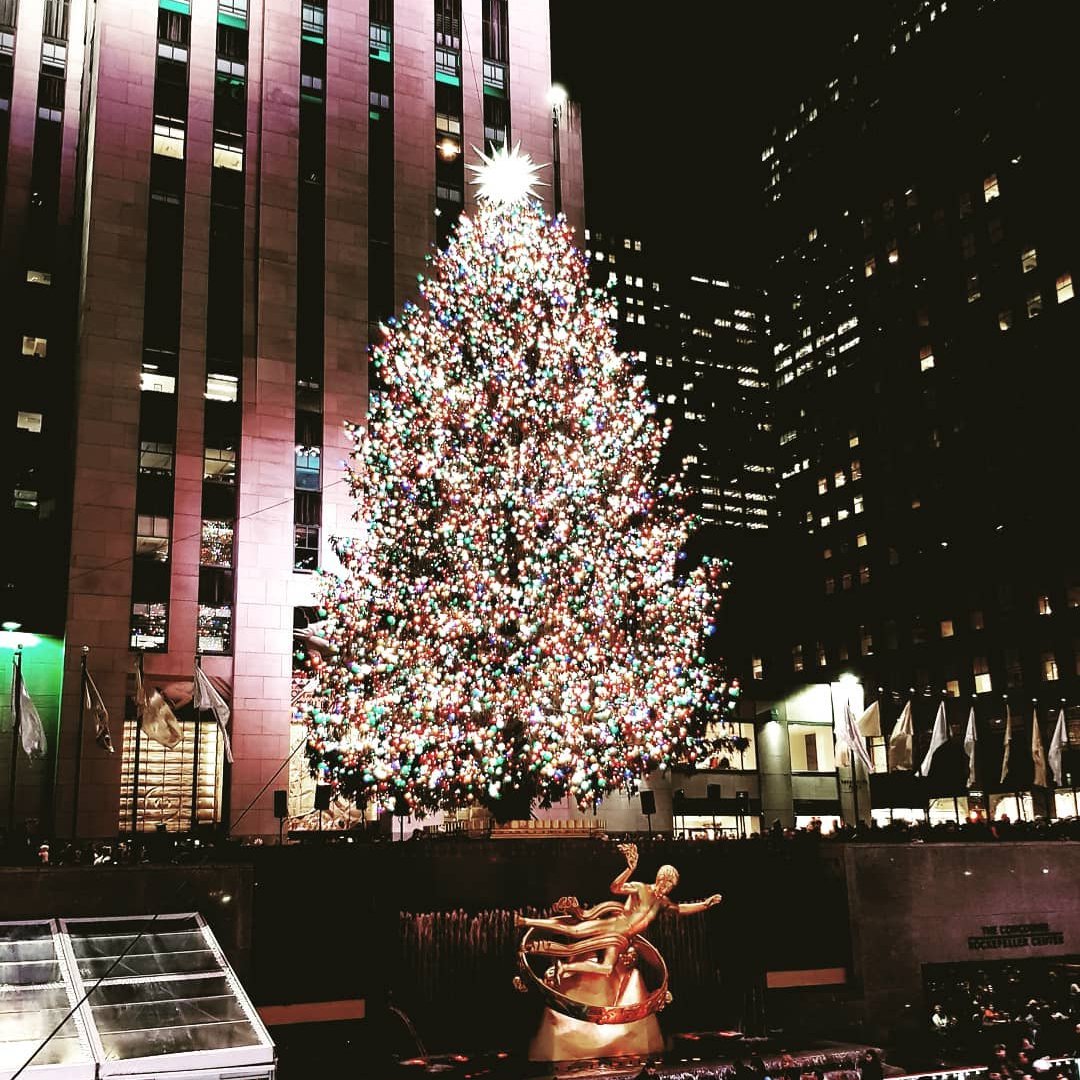 1. The Ceremony Predates the Rockefeller Center

Although the tradition of the Rockefeller Center Christmas Tree officially began in 1933, it had humbler beginning. During the Great Depression in 1931, before the building was constructed, workers erected a 20’ tall fir decorated with homemade decorations. There was no Christmas tree in 1932, and when the Rockefeller center opened in 1933, the official tradition began.

The Rockefeller tree is almost always a Norway spruce. The tree must be at least 65 feet tall and 35 feet wide and is usually over 50 years old. Tree scouts make several trips per year examining promising trees, and the decision is made by the head gardener. The tree is wrapped, attached to a crane, and then cut. Sometimes it’s sprayed with a solution that keeps it green for the season. The head gardener counts the rings to determine the tree’s age.

This tree gets star treatment! It’s usually cut and placed on a custom telescoping trailer. It’s often adorned with giant bows and banners with festive holiday greetings. The tree usually travels at night via routes that are the least disruptive to traffic, and routes are planned so that tunnels and obstructions are avoided. Although a truck usually transports the tree, it has also been transported via barges and planes.

In recent years, the 45,000 multi-colored lights and the giant Swarovski star have been the only decorations. The spectacular star replaced the previous fiberglass and gold-leaf star previously used. In 2007, incandescent lights were exchanged for solar-powered light-emitting diodes. In the past there was more variety – decorations included anything from the strung berries, tin cans and paper ornaments of the original 1931 tree to the animal-themed ornaments on one of the first official trees in 1934. In the 1950s, garlands made from berries and popcorn were used in combination with aluminum icicles.

Workers decorate the topmost branches and the top before the tree is placed upright. Carpenters drill a steel rod into the trunk to keep it secured to the base. The tree is then righted and supported with guy-wires. Scaffolding is built to place the remainder of the lights. Two dozen electricians and workers finish deporting the tree with tiny points of light attached to more than 5 miles of wire. The decorated tree remains until January 6th, when it is removed.

The first official lighting ceremony in 1933 was broadcast on NBC radio. In 1951, NBC first televised the lighting as part of the Kate Smith Show, and children watched the ceremony from 1953 to 1955 on the Howdy Doody Show. Since then, the ceremony has featured a number of famous personalities, such as Bob Hope and Barbara Walters. There is a wonderful book published about the tree’s history written by Nancy Armstrong, and Julie Salamon wrote a story loosely based on the 1995 tree.

7. Disposal of the Tree

In 1971, the Rockefeller Center decided to handle the disposal of the tree in an environmentally-friendly way. They decided to chip the tree and donate the mulch for use in trails. Lately, the wood has been used by Habitat for Humanity and the US Equestrian Team. Disposal takes only 6 hours – the tree is lowered, ornaments are removed and the branches are chipped.

8. Notable Points in the Tree’s History

In 1960, a reporter publically begged then-governor David Lawrence to spare the tree. In 1979, protesters climbed the chosen tree to demand the release of the Americans held hostage in Iran. The tree selected in 1995 was originally spotted in 1984, but the nuns who owned it had no interest in releasing it. Later, as the tree aged and it became a safety issue, they allowed the Rockefeller Center to cut it in a ceremony that included the sprinkling of holy water.

The Bragg Family tree in 1971 was the first to be mulched after its display. All trees are raised in the US with the exception of the 1999 tree, which came from Canada and had to travel a record-breaking 518 miles to get to the center. This tree also holds the record of being the tallest tree selected, at 100 feet tall. In 1998 the tree was transported to the city by barge, in 1998 by cargo plane, in in 1999 by ferry. There hasn’t always been a singular tree, two trees stood in 1963 to celebrate the opening of the skating rink, and in 1942 there were three trees. In the 1940s for several years, the trees were live and were replanted after Christmas.

I’ve not yet managed to be in New York at Christmastime but the Rockefeller Center Christmas Tree would definitely be on my must-see list. Have you seen it?