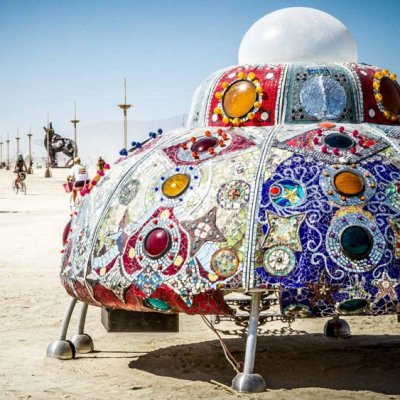 Festival season is upon us and no doubt you’ve already lined up those you’ll be attending. Don’t finish your list yet because there’s one that should be added. If there’s one festival you simply must attend, it’s Burning Man. And here’s why:

1. The Festival is Uniquely American

There is no festival like Burning Man. Many people who have attended festivals all over the world often report that there is no festival or event that is of the same magnitude or has the same diversity of art, music, and people than Brining Man. That’s because every year is different, the art and other creative displays are spontaneous, and the experience is so idiosyncratic that people come back again and again just to see what’s next!

This event occurs at the remote and ephemeral location of Nevada’s Black Rock Desert. This dry, prehistoric lakebed becomes Nevada’s third most largely populated area with over 60,000 people (rivalled only by Las Vegas and Reno) for the week that it’s in progress, but all those people vanish afterward, not leaving a trace, per the Burning Man Ethos. While in progress, this “town” even has a café, post office, and daily newspaper. This event originated on a beach in San Francisco called “Baker Beach,” and perhaps because of this, or because of the vast expanse of sand, it’s often called by its nickname, “La Playa.”

This is a hard one for first-time attendees to understand. People simply give you stuff, all the time. There is no advertising allowed, and no one is allowed to sell anything. In fact, there are no vendors at all, and the only thing that’s for sale is ice, with proceeds going to local schools. You may be gifted with anything for an ice cream cone to a beer and nothing is expected in return. Gifting acts a sort of a social lubricant, a way to reach out to fellow attendees who have no other reason to talk to each other.

4. The Art and Music

Art is almost always over the top and almost always makes a statement. Art is often interactive. Sculptures and images, along with their subtle messages, are woven throughout the tapestry of the experience as a whole, and an important part of each individual’s journey. The only cars allowed are registered art cars, which may be golf carts, dune buggies, cars, truck or trailers that have been modified in incredible ways. Music surrounds you, often from midmorning all the way into the wee hours. It takes the form of an impromptu performance by someone with an instrument or a voice, all the way to group performances by experienced musicians.

The temple, created by an artist, serves as a catharsis for everything bad in your life. People bring notes and photos of things that need some sort of resolution, and affix these tokens to the wall. By the time the Burning Man festival comes to a close, they burn down the temple and people leaving the tokens find a sense of relief seeing their notes burn along with the temple.

Burning Man is known for its “radical inclusion,” so it’s not surprise to see people there from nearly any age group, ethnicities, countries, economic class, religious background, profession, etc. You’re just about as likely to meet a teacher as you are a chef or a scientist. They may don bunny ears or tiaras. They may be wearing jeans or tutus, and sometimes nothing at all. Nudity is not uncommon for both males and females, although most nudity is partial. However, some people choose to wear nothing at all the whole time they are there.

There are very few rules, and most of them were designed to keep a crowd this large as safe as possible without restricting the experience too much. You are not allowed to have guns, fireworks, or dogs. The only cars allowed are registered art cars, which will often carry lucky passengers from time to time. If your art is supposed to be burned, you must do it on an approved burn platform. The overall rule most people aren’t prepared for is “Leave No Trace.” You must take out everything you bring in, garbage and old foodstuffs included. There is no place to throw away garbage.

There’s a camp for everything. You might be surprised, but you probably shouldn’t be if you’ve read this far. Past camps have included Math Camp, where there are impromptu chats on all things math; A French Camp, where you can taste croissants and cheese; a Hardcore Rock Camp where you can party till way past the wee hours of the morning; and a Circus Camp, complete with a trapeze. You may stumble upon places to taste wine, whiskey, absinthe, whiskey, and many other forms of alcohol.

The ‘Man’ of the Burning Man festival is symbolic of many things and different for every person. This large wooden effigy is set aflame Saturday evening, and is a cathartic event for as many reasons as there are people. It could symbolize large-scale issues such as dirty politics, corporate corruption, and greed, or it could symbolize very personal things, like an ex-spouse or a destructive lifestyle. When he explodes into flames, the crowd erupts into cheers!

If you want to attend Burning Man 2015, you can still buy tickets tickets.burningman.org The event runs August 30 to September 7.