7 of the Worlds Longest Place Names ... 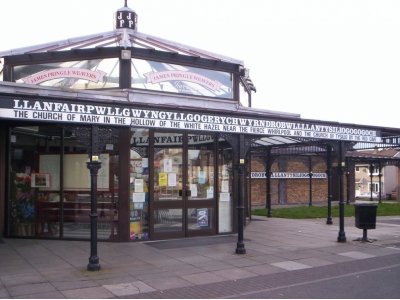 Coming in at number one, with a whopping 168 letters, is one of the world's longest place names, if not THE longest multiple place name. It is the ceremonial name for Bangkok, capital of Thailand. "Krung Thep Mahanakhon Amon Rattanakosin Mahinthara Ayuthaya Mahadilok Phop Nopparat Ratchathani Burirom Udomratchaniwet Mahasathan Aman Piman Awatan Sathit Sakkathattiya Witsanukam Prasit" is a little lengthy to have at an airport so it's usually abbreviated to "Krung Thep." The name in its entirety means 'City of the angels, great city, eternal jewel city, impregnable city of God Indra, grand capital of the world endowed with nine precious gems, happy city, abounding in an enormous royal palace which resembles the heavenly abode where reigns the reincarnated god, a city given by Indra and built by Vishnukarn.' It just rolls of the tongue, doesn't it?!

Coming in at 85 letters long, "Taumatawhakatangihangakoauauotamateapokaiwhenuakitanatahu" is the Maori name for a hill in New Zealand and translates as 'The place where Tamatea, the man with the big knees, who slid and climbed and swallowed mountains, known as land-eater, played on the flute to his loved one.' This is listed in the Guinness Book of World Records as the world's longest place name.

This one has a more modest 58 letters and is a place on the Island of Anglesey in Wales. There are, however, questions surrounding the authenticity of this place name: "Llanfairpwllgwyngyllgogerychwyrndrobwllllantysiliogogogoch." The questions exist because its official name is comprised of only the first 20 letters and it is reported that the remaining 38 letters were added as a hoax by a local tailor in the 19th Century. Hoax or not, I'm sure it has done wonders for the local tourism!

"Pekwachnamaykoskwaskwaypinwanik" is the name of a lake in Canada and is the longest official one word place name in the country. In translation it means, 'where the wild trout are caught by fishing with hooks.'

"Meallan Liath Coire Mhic Dhubhghaill" is the longest multiple name in Scotland and is in the beautiful Scottish Highlands. It's an extensive and complex mountain with many peaks, lochans (lakes) and corries (formed by glaciers in high mountains) to explore, so if you're something of a mountain rambler and explorer, this one may be for you!

Lake Chargoggagoggmanchauggagoggchaubunagungamaugg can be found in Webster, Massachusetts and is believed to be the longest one-word official place name in the United States. Its Algonquin name translates as 'Fishing place at the boundaries - neutral meeting ground.' It's the second largest fresh body of water in Massachusetts and is also known as Webster Lake, which makes organizing a meeting nearby easier, I'm sure!

Coming in at 44 letters long, this is a farm in South Africa called "Tweebuffelsmeteenskootmorsdoodgeskietfontein." It's the longest word in Afrikaans, the official language, and the name literally means 'The spring where two buffaloes were cleanly killed with a single shot.'

Has anyone visited these places? Perhaps you live near or in a place with an extraordinarily long place name. I would love to hear!