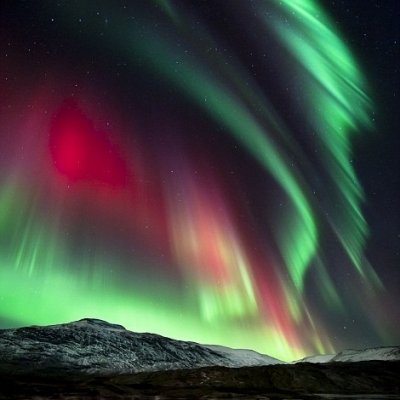 Many now known facts about the Northern Lights used to be considered as the "work of the gods" in olden times. What with science reaching farther than ever in explaining many strange phenomena, interesting discoveries have emerged that might be quite surprising. I’ve collected here some of the most fascinating facts about the Northern Lights that tell us more about their true nature, but also about their mysterious side.

One of the most intriguing facts about the Northern Lights, also called Aurora Borealis, is that they can be predicted by observing solar flare activity. More solar activity equals more Aurora displays, and 2014 has actually seen a peak in solar activity, very close to the earlier and stronger 2011 peak.

There are many legends about the Aurora Borealis, some of the most culturally interesting ones coming from North American Inuit tribes. One example is the belief that the lights are the spirits of the dead playing football with the head of a walrus. (I really wanted to add a witty comment here, but my brain simply can't match the weirdness and ingenuity of this legend.)

3. The Range of the Northern Lights

The Aurora’s lights are generally placed about 100 km above ground, and can regularly be seen from many places up north, including Canada, Norway or Siberia. But some facts about the Northern Lights show their range can reach much farther South, one of the biggest displays ever seen having been observed in 1989, when the state of Texas and North Australia were both witness to the beautiful light show.

4. Northern Lights on Other Planets

Auroras similar to the ones found on Earth have also been observed on planets like Jupiter, Saturn and Uranus. Since the phenomenon occurs due to energetically charged particles colliding with the atmosphere, the aurora has better chances of appearing on these gas giants. However, it was also found on Mars, where the atmosphere is much less abundant.

The year 1859 was witness to possibly the largest geomagnetic storm ever observed. The Carrington Superflare – as the gigantic solar flare that caused the disturbance was named – has caused a spectacular Aurora Borealis display, and scientists estimate that, if it happened today, it would cause serious technological problems on a global scale.

6. Aurora Borealis and Its Majestic Colors

The beautiful colors of the Aurora depend on the types of gas involved and the altitude where the event occurs. The more common green and blue Northern Lights generally form at lower altitudes, while less often seen red light displays come from the upper regions of the atmosphere.

7. Sunspots and the Northern Lights

An interesting fact about the Northern Lights is that their frequency is influenced greatly by sunspot activity. Sunspots appear regularly over 11-year cycles, with the latest having been observed in 2013. A greater number of sunspots normally point to the presence of more solar flares. These, in turn, can tell you that there will be a massive Northern Light display in the very near future.

The Northern Lights have fascinated and awed scientists and regular people alike throughout the centuries. Now that we’re starting to "grow up" as a civilization, it’s good to know these godly displays are more or less harmless – yet still so mysterious! What do you think about my short list? Do you have any more interesting facts about the Northern Lights you'd like to share?