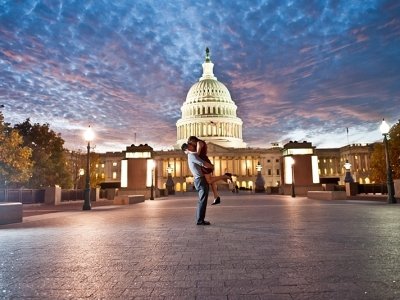 With it housing our entire federal government, it is no surprise that there are a ton of fun facts about D.C. that might surprise you. It is one of the oldest cities in the United States, which means there is a ton of history surrounding it. There are bound to be some interesting facts in a city that is home to our President, Congress, Senate, and other branches of government. Whether you have been there or not, you will enjoy hearing these fun facts about D.C.

If you have ever had to deal with the D.C. Metro during rush hour, this is one of the fun facts about D.C. that might make you jealous. There is a private subway in the basement of the Capitol that is reserved for staff members only. Imagine getting to take a subway around a 200-year-old building in the heart of our nation’s capitol. Not to mention you get to pass every single state flag on the ride. That is one subway ride I would not complain about.

2. Swaying in the Wind

The Washington Monument might be one of the most easily recognized monuments for its simplicity and strong structure. But on particularly windy days in D.C., the monument has been known to sway slightly in the wind. More specifically, it will sway about .125th of an inch on a day that has about 30 miles per hour winds. It may not be that much, but imagine standing at the top of the monument and feeling like the floor below your feet is moving.

The Capitol building might be one of the most iconic buildings in Washington D.C., but its design actually came out of a competition of architecture. George Washington and Thomas Jefferson created a contest for a design of the capitol. They ended up rejecting all of the designs that came in and ended up accepting a bid that came in past the deadline from William Thornton.

The MLK Memorial commemorates famous American civil rights leader Martin Luther King, Jr. Surprisingly, his entire memorial was made in China by sculptor Lei Yixin. The image of MLK is made out of ~59 pieces of Chinese granite and was assembled in China and shipped over to the States.

After a hard day of working for the government, Washingtonians like to relax with a nice glass of vino. Washington D.C. once topped the list as the city where the most wine was consumed per person.

6. You Must Not Be This Tall

If you have ever wondered why D.C. has no skyscrapers like New York or Philadelphia, you have Congress to thank for that. They passed the “Height of Buildings Act” in 1910, which limited how tall buildings could be. Residential buildings could be no taller than 90 feet and commercial buildings had to stay under 110 feet.

7. Reach for the Stars

There are a ton of museums in D.C., including the National Air and Space Museum. If you are fascinated with space and the stars, you might be interested to know that you can actually touch a part of the moon at the Air and Space Museum. They have a rock from the moon on display for visitors to get their hands on some of the space action, literally.

D.C. is one of the most historical cities in the United States, so it makes sense that there are a ton of fun facts about the city that you did not know. What did you think of these fun facts about D.C.? Are there any other surprising facts about Washington that you know of? Do you love Washington D.C. or do you prefer another city? What is your favorite thing about D.C.?