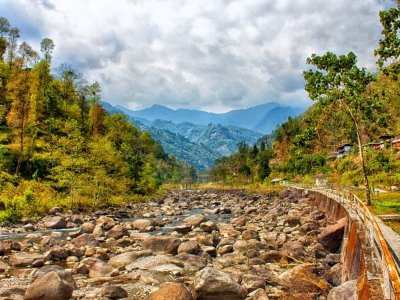 If you’ve never heard of this place, you won’t be aware of the great experiences to have in Sikkim. It wouldn’t be surprising that you won’t know of Sikkim. It is the second smallest of the Indian states, ahead of Goa as the smallest, and it certainly has never attracted the tourist spotlight in the way Goa has. Sikkim is a landlocked state, located in the Himalayas and even though so small, it shares borders with India’s West Bengal, Nepal, Tibet and Bhutan. Unsurprisingly, the features that characterize its neighbors are heavy influences in Sikkim – particularly for the majority of the population, which is of Nepalese ancestry. Consequently, many of the travel experiences in Sikkim echo those of the bordering states.

1. Base Yourself in Gangtok and Pelling

Gangtok, or ‘hill-top’ as it is translated, is Sikkim's capital. It is safe, easygoing and is the ideal base for your experiences in Sikkim, with lots of hotels, guesthouses, restaurants, shops as well as tours, trekking and activities that can be organized here. Pelling in West Sikkim is a ‘village,’ but caters specifically for the tourist trade and you get a fantastic view of Mount Khangchendzonga. Regular buses run between Gangtok and Pelling.