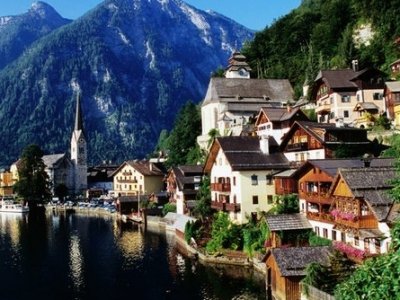 Lying in the European Alps and possessing a fascinating history, the things to do in Austria are varied and interesting. Although not one of the biggest countries of Europe, and now less powerful and influential than in the past, this landlocked nation is marked by antique but vibrant cities, scenic lakes and of course, the glorious Alps. The menu of things to do in Austria will include something for every traveler.

1 Schnitzel, Coffee and Cake - Oh My!

Indulging in local specialties is one of the greatest things to do in Austria. The schnitzel of Vienna (called Wien in native German, hence the dish name Wiener Schnitzel) is breaded and fried veal. For dessert, there are dozens of varieties of cakes and puddings - the most famous being sachertorte (chocolate cake par excellence). Wash it all down with some coffee but skip the big chains! Austria and Vienna in particular, has a whole culture built around the Kaffeehaus (coffee house). The institutions are so important, they have been designated as “Intangible Cultural Heritage” in UNESCO’s "National Agency for the Intangible Cultural Heritage".

2 Tour a Birthplace of Classical Music

Wolfgang Amadeus Mozart was born in Salzburg in 1756. His birthplace and residence there have been turned into museums which are among the most popular places to visit in Austria. Tours of the residence take about 1.5 hours, while a tour of the birthplace is about 1 hour. Reservations are not needed if you don’t require a guide. Each year in January near his birthday, the Mozarteum Foundation Salzburg hosts a week of classical music and opera performances know as Mozart Week. For 2014 the dates are 23 January through 2 February.

3 Ski or Hike the Alps

There are many ski regions and resorts in the Alps, but in Austria the most famous of them is Innsbruck. Located in western Austria, this city is considered the winter sports capital - it is one of only three places in the world to have hosted the Winter Olympics twice. In the summer it emerges as a mountaineering Mecca, and there are numerous walking trails and guided hikes available.

One of the most unique things to see in Austria is The World of Ice Giants above Werfen. This is the world’s largest explored ice cave labyrinth at over 30 miles long. 1 hour 25 minute tours are available from May to October. Dress for the cold even during summer months.

5 Drink Local Wine at a Heuriger

Heurigers – meaning this year’s - are taverns where working farms and vineyards sell their own wine, and they are some of the best places to visit in Austria. Heurigers differ from commercial restaurants in that they only sell their own vintage and they are usually only open for 2 to 3 weeks at a time. Limited light meals usually accompany the wine. Grinzing, northwest of Vienna, is a good place to find one. Don’t be fooled by Hueriger-style restaurants in Vienna; if they sell beer, coffee or wine from other sources they may be tasty, but they are not an authentic Heuriger.

6 Take a Bath in Beer

Go beyond the typical brewery tour experience with a stay at the Diana Hotel in Seefeld in Tirol. The Beer Barrel bath special includes a 20 minute soak in a beer spa followed by a rest on an oat straw bed and a 4 course Biermenu (Beer menu).

The Spanish Riding School is a center of classical dressage featuring the famous Lipizzaner horses. These horses are the oldest domesticated breed in Europe and are on the endangered list. The school has operated for over 440 years. Performances were once only given to guests of the Royal Court, but today the Headquarters in Vienna welcomes tourists. There are tours and activities year round, but know that the performing stallions are on break during the summer months.

One of the best places to visit in Austria is Graz, the second largest city after Vienna. This UNESCO World Cultural Heritage Site has one of the best preserved city centers – called “Old Town” in Central Europe. Visit some of the 1,000 buildings there, but save some energy for the nightlife. With over 44,000 students from 6 Universities, to say the party scene is vibrant is an understatement

9 Visit a Christmas Market in Vienna

The beginning of Advent (16 November for 2013) signals the start of Christmas Market season. Enjoy traditional mulled wine, candied fruits and roasted chestnuts as you wander between wooden market stalls under twinkling lights. Shop for trinkets, gifts, and toys at markets throughout Vienna from 9am-9pm daily. Season ends 24 December.

There are plenty of things to do in Austria. If you choose it for a vacation, you won’t be disappointed. It is a stunningly beautiful country. Have you been?