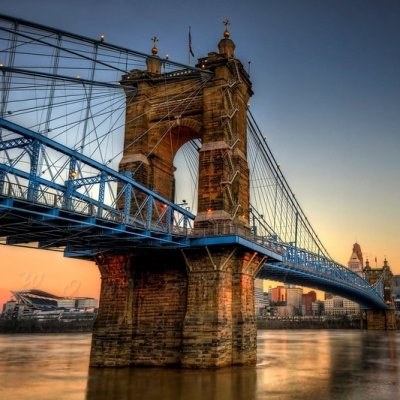 Don’t dismiss Cincinnati as a tourist destination. Not only is it the 28th largest city in the US but it also boasts more than 225 years of history. It has a wonderful cultural pathos thanks to a heady mix of Irish and German heritage and with historical sites, sporting events and plenty of festivals, no one should be bored by a visit to “The Queen City”. I’m only going to tease you with just seven of the best attractions of Cincinnati.

One of the biggest attractions of Cincinnati, and in fact, one of the biggest Oktoberfest celebrations in the U.S., this little party attracts about 500,000 people in September. People come for the German beer and food, and stay for the fun. For example, there’s the World’s Largest Chicken Dance and the World Bratwurst Eating Contest, which draws quite a crowd. However, the beer barrel roll, running of the wieners and the beer stein race are also must-sees. Seven stages feature continuous German music, and there are more than 30 vendors who specialize in over 200 German dishes. Over 1,300 barrels of beer are consumed during the festivities!

Happening on Memorial Day weekend, the Taste of Cincinnati is the longest running culinary arts festival in the U.S. Over 40 restaurants offer up their specialties, and the 500,000 people who attend make it one of the largest street celebrations in the U.S. Spread out over 5 city blocks, you can enjoy taste testing all kinds of food and drink while enjoying live music in a variety of genres performed by local musicians. The event in conveniently located within walking distance of several hotels.

If you’re in Cincinnati in June, be sure to catch the Bunbury Music Festival. Focusing predominantly on alternative and independent rock bands, in the past the festival has featured bands such as Flaming Lips, MGMT, Fall Out Boy, and FUN. The Ohio River provides a wonderful backdrop for the festival, but also for the Craft Beer Village, which offers unusual brews and well-loved staples.

This 5-mile trail runs parallel to the waterfront that crosses into 2 states and 3 cities. Named for one of the founders of the US Boy Scouts, it crosses into Cincinnati, but also enters Newport and Covington in Kentucky, crossing bridges to get there. Along the way, you’ll see numerous historical landmarks such as the Daniel Beard house, the Carneal House (part of the Underground Railroad) and numerous statues. See the paddlewheel “American Queen,” the 80’ line depicting the water level in the 1937 flood, and other interesting stops. Many areas include the blue and green wavy-line insets in the sidewalk to mark the way.

Home of the Cincinnati Symphony/Pops Orchestra, the Cincinnati Opera and the Cincinnati Ballet, this historic music hall is located in the heart of the revitalized Over-the-Rhine neighborhood. Even if there are no performances, the building is something to behold. This National Historic Landmark, built in 1878, was built atop a pauper’s cemetery, and it may be the reason why it’s also known as one of the most haunted places in the U.S.

At 49 stories, this 574 foot building was completed in 1930 in the heart of downtown Cincinnati. This building is the 2nd tallest in Cincinnati and offers spectacular views of the city. The complex contains the Hilton Cincinnati Netherland Plaza, a fine example of French Art Deco design – in fact, it was used as a model for the Empire State Building. Ride the elevator to the top floor, then take an elevator that is original to the building for the final 4 levels.

Surrounded by Eden Park, Mount Adams provides an escape from the bustle of the city and allows visitors anything from a restful look at the city to a fun night on the town. Inside the park are numerous interesting locations, such as the Krohn Conservatory, the Cincinnati Art Museum, the Rookwood Pottery, and the Holy Cross Monastery. The 21-and-over crowd loves this area for its trendy bars and restaurants.

You may not have thought of Cincinnati as a top destination but by the sounds of things, you’re guaranteed a good time. Would love to hear from city residents who can share some secrets of where to go.